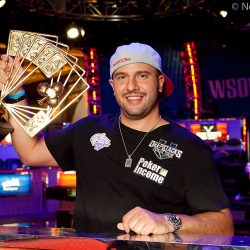 Mizrachi goes for his third Chip Reese trophy on Monday.

The $50,000 Poker Players Championship at the 2018 World Series of Poker played through the money bubble on Sunday with Mike Gorodisnky suffering a massive cooler to become the event’s bubble boy. Michael Mizrachi will return with the chip lead as the final 12 play down to the final 6 on Monday. Mike Leah and Phil Ivey are near the top of the leaderboard.

Meanwhile, a record-breaking Seniors Championship has reached the final table. Gary Friedlander leads the final eight into play on Monday.

The $50,000 Poker Players Championship kicked off on Friday with an elite field of 87 players. Many of the game’s top names entered the event and most fell during the first three days of play. Among those that failed to make the money included Daniel Negreanu, Justin Bonomo, Jason Mercier, Ben Lamb, Anthony Zinno, David Benyamine, and 2017 champion Elior Sion.

Day 3 of the PPC played to the money and Mike Gorodinsky wound up being the unfortunate bubble boy. During an NL Hold’em round, he looked down to pocket kings and shoved pre-flop. Mike Leah woke up with pocket aces and snap-called. Both players caught a set on the flop and Gorodinsky failed to catch his one outer to double up.

After his bustout, Gorodinsky posted the following on Twitter:

Stone bubbled the 50k with KK to AA in NL to put a magnificent cherry on top to the most painful summer of my career. ?‍♂️ ?

Yehuda Buchalter and Randy Ohel both finished in the money prior to the end of play Sunday night. Mike Leah scooped a massive pot late to move over 3 million in chips and finished second in chips. Michael “The Grinder” Mizrachi finished Day 2 as the chip leader and went on a massive run during Day 3 to widen that lead. He finished the day with 4.23 million in chips.

Phil Ivey was chip leader early in the day and hovered around the top of the leaderboard most of the day. He finished with 2.14 million, good for fourth place. Other notables still in contention include Dan Smith, John Hennigan, Brian Rast and Sean Deeb.

The final table of this event will play down to six on Monday. As is customary for this event, the eventual winner not only gets a WSOP bracelet but also the Chip Reese Memorial Trophy that commemorates the late Reese’s victory in the $50k HORSE Event in 2006. The PPC was originally the $50k HORSE but later changed to an eight-game format. Also, the eventual winner will receive $1.23 million in prize money.

Both Mizrachi and Rast are two-time winners of this event and are both looking to become the only person in history to win three PPC events.

Year-after-year, the $1,000 Seniors Championship at the World Series of Poker sets records. This year, it once again set the record for the most entries in a single starting day with 5,919 entries collected on Friday.

The WSOP Seniors event once again broke its own attendance record https://t.co/nqlM4uNDuU pic.twitter.com/1KppMySTWz

Day 1 action saw the field thinned down to 1,934 players and the second day saw the event reach the money. Only 101 players returned on Sunday to play down to the final table. The field included 83-year-old Andreas Dassopoulos. Other notables to make Day 3 included Per Hildebrand, Barry Schultz, and prior bracelet winner Keith Lehr.

The final table was reached on Sunday and prior to the conclusion of play, Thad Smith fell in 9th place. This leaves eight players to return on Monday to play for the bracelet. Gary Friedlander will return on Monday as chip leader.

Here are the final eight players remaining in the Seniors Championship: