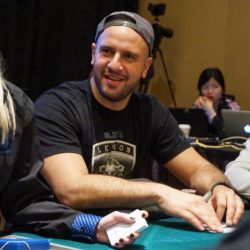 The final table of the $50,000 Poker Players Championship is now set. Michael Mizrachi extended his chip lead and has almost a 2 to 1 lead over the field. John Hennigan also made the final table and is looking to win his second title while Mizrachi is looking to become the first three-time winner.

Jean-Robert Bellande was the first to fall when his pocket sevens ran into the pocket queens of Aaron Katz. Chris Vitch followed him to the rail soon after when his queen-low was no good against the nine-low of Phil Ivey during a Razz Round.

Brian Rast’s run at a third PPC title fell short with an 8th place finish. In his final hand, he was all-in during Triple Draw but unable to outdraw the 9-7 of Michael Mizrachi.

Heading into the unofficial final table, Michael Mizrachi had a monster lead over all players and Mike Leah was the short stack with less than 5 big bets. Leah managed a key double against Mizrachi to leave Greg Mueller the short stack.

Mueller became this event’s final table bubble boy during an NL Hold’em round when his set of jacks were outdrawn by Mizrachi who hit a runner-runner straight.

Michael Mizrachi has almost a 2 to 1 chip lead heading into the final table of the $50k Poker Player’s Championship. He is looking to become the first three-time winner of the event. Dan Smith is the next closest player with 4.48 million.

Mizrachi chipleader 6 handed in the 50k? If he wins 3 that’s just beyond insane holy shit

John Hennigan had a roller coaster day but enters the final table fourth in chips. He is looking to win this event for the second time. Mike Leah will start as the short stack and has less than 10 big blinds when play resumes on Tuesday.

The players will return tomorrow to play until a bracelet and the Chip Reese Memorial Trophy is awarded. Below are the final table chip counts:

The final table of the $1k Seniors Champions played to a conclusion on Monday night. Gary Friedlander took a nearly 2 million chip lead into the final. Here’s a quick look at the final table participants and their starting chip counts.

Friedlander started as chip leader but ultimately finished in fourth. Down to about 16 big blinds, he shoved pre-flop with Ah-5s but was called by the As-Js of Bill Stabler. Friedlander flopped a wheel draw but a jack on the turn was enough to knock him out in fourth.

Matthew Davis battled Bill Stabler heads-up for the title. Only four big blinds separated the two at the start of heads-up play with Davis starting with the chip lead. Stabler quickly took the chip lead and found himself more than a 2 to 1 leader multiple times. Davis fought back and eventually pulled into the chip lead.

Davis pulled into nearly a 2 to 1 lead of his own prior to the final hand. On a flop of 6d-2d-3h, Davis check-raised all-in with Kd-8d and Stabler called with 5d-3s for middle pair. The turn 6c missed both players and when the river 8c hit, Stabler thought he secured a double but instead Davis had rivered a pair to win the hand and his first WSOP bracelet.

In Davis’ day job, he teaches statistics as Chabot College in Haywood, California. Now he can tell his students that he got a 662 to 1 return on his investment after winning the Seniors Championship, the bracelet and $662,983.