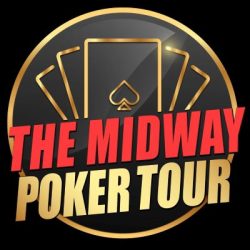 In a year overwhelmed by a pandemic, it didn’t seem likely that we’d be writing much about live poker tournaments. But here we are. The poker tour hosted one disorganized event and tried to pay its players in precious metals. The founders disappeared, then reappeared to claim to want to make the players whole, and then disappeared again.

The Midway Poker Tour tried to host a poker tournament in Chicago at the beginning of October with a charitable component. But when it then tried to pay its in-the-money players with precious metals to get around gambling laws, the entire situation went downhill quickly.

Now, the founders have disappeared again, leaving the charity with questions and the players without their winnings considering a lawsuit.

It sounded okay in the beginning. Dan Bekavac had been a poker player for years, and he had more than $290K in live tournament earnings to his name. He was a regular on the Mid-States Poker Tour and the WSOP Circuit.

Bekavac launched something called the Midway Poker Tour. The tour was to kick off at the Sheraton Suites in Chicago, where he rented some ballrooms for the tournament. There were some cash games to be livestreamed and $1,100 buy-in Main Event with two starting days and $260 satellites.

As the pandemic had relegated most live poker players to their homes for months, players in the Chicago area were anxious to play a live tournament. They turned out to give the event 266 entries and a $258,020 prize pool. The top 31 players were to be paid, with $2,300 as the minimum payout and $55,060 as the winner’s take.

Action played down to allow the 31 finalists to return on Sunday, October 4. The action started with a lack of appropriate chips. That, however, paled into comparison to what the players discovered about the payouts.

Since Illinois laws prohibit actual poker tournaments in Chicago, Bekavac arranged to call it a charity tournament with some proceeds going to 4 KIDS Sake. Bekavac conveniently didn’t tell the players what they found out when they received their “payout” information. They were going to receive $1,600 in cash and the remainder of their winnings in “precious metals” or “collectables.”

I probably wasn’t supposed to take this photo in the secured area, but this is what it looks like to be paid in precious metals. pic.twitter.com/7RjT7adn3z

As one might assume, that did not go over well. And conveniently, Bekavac wasn’t there. In fact, none of the tournament organizers were in attendance. The charity representatives – none of which had poker experience – were left to try to sort out the payouts.

Chad Holloway of PokerNews was on site and researched further after the ordeal to find some of the missing puzzle pieces. Even so, the “buyback” of the precious metals by a dealer fell through, leaving all of the poker players with their buy-ins, $500 extra in cash winnings, and a whole lot of “collectables.”

Bekavac: Excuses and an Escape

Midway Poker Tour organizer Bekavac took to the company’s Facebook page to apologize…sort of. He noted that he “busted my ass trying to bring live poker back for the players” and spent $55K of his own money to do so. He feigned ignorance about the lack of a buyer for the coins and what he called last-minute changes to his planned event.

A second apology the following day included the players, as well as an apology for the initial post’s frustration and anger.

Holloway spoke with Bekavac and reported that Bekavac planned to make it right for all of the players. And as Holloway followed along via social media and poker forums, he confirmed that $12,546 was repaid to 19 of the 31 players in a somewhat erratic fashion.

The 4KIDS Sake charity received only $640 from the entire debacle, and that came from a tip jar at the tournament. The agreement was that Midway would donate 50% of the proceeds from the event after operational costs, but Bekavac told them there was nothing left over after those costs.

According to Holloway, 4KIDS Sake is considering the option of letting the courts handle the matter.

As for the Illinois Department of Revenue, which authorized the tournament and its manner of promised payments, a spokesperson for that entity referred Holloway to local law enforcement agencies. When asked directly about any possible ongoing investigation, that person said it was a “tricky question” and wouldn’t comment on whether there was or wasn’t an investigation.

Some of the players shorted in the tournament have posted on forums that they’ve sold (or tried to) the coins but only received a portion of the worth claimed by the Midway Poker Tour.

It's been nearly three weeks since the Midway Poker Tour became marred in a payout controversy.

Here's an update on where things stand, and it isn't good.https://t.co/TmGewdPzmN pic.twitter.com/anNNukkmNw

There is more. Rather, there will be more.

The mother of one his many children posted quite a few accusations regarding Bekavac in an online forum. There is much to try to substantiate.

In addition, there is a lawsuit against Bekavac Trading Company, apparently a family company. Plaintiff George & Company alleges that Bekavac Trading Company infringed on the company’s trademark, among other charges, pertaining to a dice game called LCR. It appears that the US District Court for the Northern District of Illinois Easter Division scheduled an upcoming hearing to enter a default judgment, since the defendant has yet to respond to the served papers.