MicroMillions 16 Set for November 10-24 on PokerStars 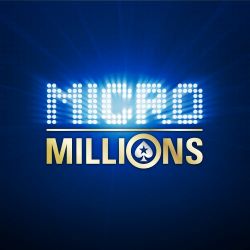 But there is one online poker tournament series that hits directly at the heart of micro-stakes players: MicroMillions.

The series runs several times each year due to its popularity. MicroMillions 15 just took place in July, but the next iteration is set and ready to kick off on November 10.

MicroMillions 16 will get started on November 10 and run through November 24. And during that time, there will be 147 tournaments that will cumulatively guarantee $4.3 million in prize money.

The series is bigger than the last edition when it was announced. This one will offer six more events and $500K more in guarantees.

Here are some other fun facts about MicroMillions 16:

–There will be 89 hold’em tournaments.

–There will be 58 non-hold’em events.

–There will be 35 turbo tournaments.

–Other formats will include Omaha, Eights-or-Better, Zoom, Showdown, Fusion, and 6+ Hold’em.

The most obvious highlight of MicroMillions 16 is going to be the Main Event. The $22 buy-in NLHE Main Event will be the highest buy-in event of the series but offer a $1 million guarantee.

Then there is Event 1. It is a $4.40 buy-in Phase tournament with a $500K guarantee. Players can play as many times as they’d like from now until November 24, as Phase 1 options happen every two hours. On that last day of the series, Phase 2 will begin with players in the money. There will be Phase 1 events running every day from now until then.

On the first day of MicroMillions 16 – November 10 – there will be six tournaments in addition to Phase 1 of Event 1:

It is no surprise that MicroMillions 16 has a leaderboard, but there are several of them and $5K in prizes up for grabs.

Other Opportunities of Note

There are many ways to get into MicroMillions 16 events without even paying the full buy-in amounts.

Spin & Go’s are already running daily for as low as $0.35 and $0.40. And thousands of tournaments tickets will be awarded in that way.

There will be a freeroll on November 18 that will award $10K in MicroMillions tickets. Players who compete in at least 10 MicroMillions tournaments before then and play one Phase event between from November 10-17 will receive a ticket to the freeroll.