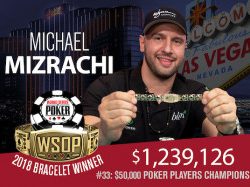 The second most prestigious bracelet event of the World Series of Poker played out on Tuesday night. Michael Mizrachi led six of the game’s finest into final table play at the $50,000 Poker Player’s Championship. Mizrachi was looking for his third PPC title and fourth career bracelet.

Meanwhile, John Hennigan was looking for his second PPC title and fifth career bracelet. In the end, it was Hennigan and Mizrachi battling for the title and “The Grinder” making history with his third PPC win.

With his starting stack, Mike Leah looked to be the first player knocked out of this PPC final. Instead, Leah managed to build some chips early to pull back into the middle of the pack.
Aaron Katz wound up being the first player knocked out at the final table. After giving up about half of his stack to Mizrachi in a PLO hand, Katz put the last of his money in during Limit Hold’em. On a flop of 9c-7d-4s, Katz was all-in with 10h-9d for top pair. Glaser held Jd-4d for a pair of fours and a backdoor flush draw. The turn fell the 3d and river the 5d to give Glaser his flush and send Katz home in 6th place, earning $191,234.

At the break: Michael Mizrachi holds a 2-1 lead over the next opponent. pic.twitter.com/yj23VfqAUN

Soon, it was Glaser that would find himself sliding at the final table. The beginning of the end came against Mike Leah. Leah was all-in on the flop with pocket tens and a gutshot straight draw. Glaser had Kd-10d and needed help. The turn and river blanked both players and Leah doubled.

Later, Glaser lost most of his remaining chips to John Hennigan in a Stud 8 hand where his eights-up were no good against Hennigan’s jacks-up. A few hands later, Leah got the rest of Glaser’s chips. Glaser was drawing to an eight-low in Triple Draw against a made 8-7 for Leah. Glazer ended up making a pair and was out in fifth. He earned $260,578 for his deep run.

Leah battled hard, but he was unable to get much above 2 million in chips for most of the final table. Finally, he ran out of steam against Michael Mizrachi. During a PLO hand, Leah moved all-in on a flop of Jc-4c-2h and Mizrachi called. Leah had As-Ks-10h-7h for air. Mizrachi held 6h-5h-5d-4s for a pair of fives and a gutshot draw. The turn fell the 3s to give Mizrachi his straight and Leah was out in fourth place, earning $364,197.

Dan Smith, John Hennigan, and Michael Mizrachi were left to battle for the bracelet and at one point during three-handed play, the stacks were near even. Then Mizrachi went on another mammoth run and Smith found himself on the wrong end of multiple confrontations with The Grinder.

Finally, with just under two big bets left, Smith was all-in during Limit Hold’em with a double gutshot straight draw against A-K for Hennigan. The turn blanked both players but the river produced an ace to send Smith to the rail in third, good for $521,782.

He quickly pulled out to a 10 million chip lead and proceeded to finish Hennigan off during NL Hold’em. In the final hand, Hennigan bets a flop of Qh-9s-5h and Mizrachi raised to 2 million. Hennigan moved all-in for his last 5.3 million and Mizrachi made the snap call with 9h-8h for middle pair and a flush draw. Hennigan had Jd-10c for an open-ended straight draw.

The turn 10h gave Mizrachi a flush and left Hennigan drawing dead. John Hennigan finished runner-up, earning $765,837 and likely taking over the points lead for WSOP Player of the Year.

Michael Mizrachi has become the first player in history to win three WSOP $50k Poker Player Championship titles. The PPC is considered by many pros to be the true “World Championship of Poker” due to the prowess needed in eight different forms of poker.

Mizrachi earned his fourth career WSOP bracelet in this event along with his third Chip Reese Memorial Trophy and $1,239,126.