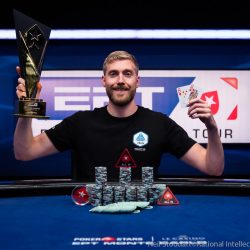 The highlight of each European Poker Tour season is the EPT Grand Final. PokerStars pulls out all the stops for a massive tournament extravaganza, as it did again this year in the 14th running of the finale in Monaco. The Sporting Monte-Carlo hosted the festivities.

Beginning in the last week of April, players gathered in the luxurious French Riviera locale to play high-level poker, but the major draw of the series was the EPT Main Event, which took place from April 29 to May 4.

When the EPT Monte Carlo hosted its first Main Event at that location in 2005, there were 211 players, and Rob Hollink bested the field for a €635K top prize. In 2007, the gathering jumped to 706 players, when Gavin Griffin won €1.825 million in his victory. The biggest year for the prize pool was in 2009, when 935 players turned out, and Pieter de Korver won €2.3 million for winning it. But the largest field happened in 2016 with 1,098 players. Other winners have included Mohsin Charania, Steve O’Dwyer, and Adrian Mateos, but the 2018 Main Event saw an amateur player by the name of Nicolas Dumont win the €712K payout for surviving the 777-player field.

All of that history led to the 2019 EPT Monte Carlo Grand Final.

Action began on April 29 with a €5,300 buy-in required and a single reentry permitted over the course of two starting days.

Day 1A brought in 342 entries, though only 128 of them survived until the end. Ludovic Geilich grabbed the chip lead with 271,40 chips. Day 1B added another 561 entries to the total, but registration remained open. By the end of Day 1B, only 239 players bagged chips, and Sylvain Mazza took the overall chip lead with 288,700 of those chips.

Day 2 brought in a few reentries, and the numbers for the tournament were then released as:

The money bubble burst during that second full day of play, with Rotislav Evdokimov as the first player to cash. Others who followed included Benny Glaser, Sam Grafton, Gaelle Baumann, and Mike Watson. There were 107 players who survived, and Wiktor Malinowski held the lead with 769K, followed by Julien Martini with 735K chips.

Day 3 whittled the field down to 30 players, but it started with the elimination of Ramon Colillas. He was followed to collect payouts by the likes of Seth Davies, Julien Martini, Ami Barer, Fatima Moreira de Melo, Ludovic Geilich, Patrick Antonius, and Dario Sammartino. Of the final 30, Tim Adams held the chip lead with 2.19 million, Nicolas Chouity followed, and Melika Razavi was in third.

Day 4 made its way to the final table through bustouts of players like Christoph Vogelsang, Razavi and Chouity, Sam Greenwood, and Tim Adams. Manig Loesser ultimately ousted Rustam Hajiyev in seventh place for €109,510 to end the night.

The final table was set up with Nicola Grieco as the chip leader with 7.16 million chips, followed by Viktor Katzenberger with 6.07 million. Wei Huang, Manig Loeser, and Ryan Reiss were also in contention, with Luis Medina on the short stack of 1,105,000 chips.

Medina stayed in action with an ever-shortening stack until Loeser busted him in sixth place.

Five-handed play lasted for many hours, with Loeser climbing into the lead, Huang losing his momentum, and Reiss hanging on through numerous double-ups. Huang made his way back up the leaderboard, though, and Grieco became the shortest stack. Loeser finally busted Grieco in fifth place.

Huang stepped in to eliminate Riess in fourth place.

Katzenberger then lost some ground while Loeser resumed the chip lead. Huang then eliminated Katzenberger in third place to take 12.08 million chips into heads-up play against the 15.58 million of Loeser.

Huang worked his way into the lead, but Loeser quickly took it back. Huang finally shoved with K-8 against the Q-8 suited of Loeser, but the board of J-9-5-T-A to give Loeser the straight and leave Huang out in second place. Loeser claimed the EPT Grand Final title.

After an epic final-table battle, congratulations to Manig Loeser on winning the #EPTMonteCarlo Main Event title and €603,777. ??? pic.twitter.com/9ujRRzuXAk