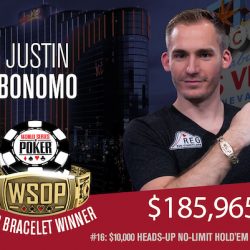 Justin Bonomo might be on the sickest heater in the history of poker. In the last two weeks alone, he’s won three poker tournaments. Correction – make that four. Bonomo won the $10k Heads-Up NL Hold’em Championship at the 2018 World Series of Poker on Friday.

He defeated Martjin Gerrits in the quarterfinals and Jason McConnon in the finals to win his second career bracelet. While this was unfolding, Benjamin Moore took down the $1,500 Big Blind Antes NL Event for his first career WSOP cash and bracelet.

Only six players remained heading into the final day of the $1,500 Big Blind Antes NL Hold’em Event. Each players remaining was looking for their first WSOP bracelet win. In less than six hours, we went from six players to the winner. Benjamin Moon started the day as chip leader with Colin Robinson only two big blinds behind.

Bohdan Slyvinsky started the day as the short stack and was the first player out, running Ad-7c into the Ah-Qh of Colin Robinson. Nathayan Nguyen was next out after his Kd-Js failed to outrun Benjamin Moon’s Ah-7d.

Moon started to go on a tear and proceeded to eliminate the remaining players en route to his first bracelet. Steven Snyder fell in fourth when his Kd-4d was unable to outrun Moon’s Ad-10s. Colin Robinson was knocked out in 3rd after shoving with a gutshot straight and flush draw against Moon’s top two pair.

At the start of heads-up play, Moon had a 3:1 chip lead over Romain Lewis. Lewis was unable to get any serious traction against Moon and finally shoved pre-flop with Ad-2d. Unfortunately for him, Moon woke up with Ac-Js and made the easy call. The board bricked both players and Benjamin Moon took the title.

This was Moon’s first WSOP cash along with his first bracelet win. He also received $315,346, the largest live score of his poker career.

Justin Bonomo has been on an incredible run in 2018 and that run continued during the $10k Heads-Up NL Hold’em Championship. He started the day in the final four and ultimately found himself playing for his second career WSOP bracelet.

At the start of the day, four players looked to take down this prestigious bracelet and $185k in prize money. Martjin Gerrits faced Justin Bonomo in the quarterfinals while Juan Pardo Dominguez faced Jason McConnon.

The Gerrits-Bonomo match was first and it appeared that Gerrits may have finally figured out the solution to beating Bonomo. At one point, he held a 5:1 chip lead and looked ready to advance.

However, Bonomo doubled-up three straight times to take the chip lead and from there it seemed Bonomo was destined to win this event. This was proved further in the final hand when Gerrits shoved all-in pre-flop with 10-8 and was called by Bonomo holding Jc-8c. The flop fell Qc-10c-9s to give Bonomo the nut straight and a flush draw. The turn and river bricked to send Bomomo to the finals.

Bonomo through to the final of the $10,000 Heads-up Championshiphttps://t.co/wUOci45tsi pic.twitter.com/9H4VJAHgIj

The match between Juan Pardo Dominguez and Jason McConnon only took 18 hands. In the final hand, McConnon checked a board of 9h-6h-2d-As-10h and Dominguez bet 175k. McConnon check-raised all-in and Dominguez made the call showing pocket aces for a set. McConnon showed Qh-5h for a flush and advanced to the finals.
The championship match between Justin Bonomo and Jason McConnon started with McConnon taking a small lead, but that didn’t last long. Once Bonomo pulled out in front, it was all Bonomo, all the time. McConnon’s stack continued to shrink until he had only about 10 big blinds.

McConnon put the last of his chips at risk pre-flop with Qs-9d and Bonomo made the easy call with pocket fours. A Kh-10h-2s flop gave McConnon a gutshot straight, but Bonomo had destiny on his side. The turn 2h and river 8c gave Bonomo the hand and his second career WSOP bracelet. McConnon finished in second, good for $114,933.

Winning a WSOP would seem like the accomplishment of the summer but for Justin Bonomo, it almost just seems like another day at the office. Here’s a quick list of Bonomo’s wins in just the last two weeks:

That’s almost over $5.9 million in two weeks. For the year, Bonomo has nine wins and over $14.7 million in live earnings. He takes a small step closer to Erik Seidel and Daniel Negreanu on Poker’s All-Time Money List.

Just how much more will Bonomo win in 2018? With the Big One for One Drop and the WSOP Main Event still to come, will he catch Negreanu before the end of the summer? Only time will tell.