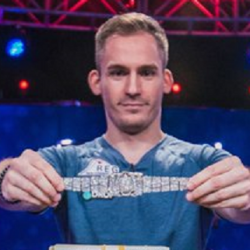 Just six players returned to play for $10 million and the final bracelet of the 2018 World Series of Poker. The final day of the Big One for One Drop kicked off Tuesday evening with Justin Bonomo looking to dethrone Daniel Negreanu from atop Poker’s All-Time Money List.

Below are the chip counts at the start of play:

This final table was packed with drama and action and in the end, two Goliaths of the high stakes world battled for $10 million with Justin Bonomo continuing what is surely the greatest single-season run in live tournament poker history.

David Einhorn and Byron Kaverman started as the short stacks and needed to get something going quickly. Einhorn managed to find a good hand that was worthy of trying to double with, but he made the mistake of failing to shove pre-flop and it cost him.

Einhorn min-raised with As-Qh pre-flop from the button and Justin Bonomo called with 7d-4h from the big blind. The flop fell 7c-5c-5h and Einhorn bets 1.6 million. Bonomo then shoved and Einhorn made the call. Bonomo told him he had mixed feelings because Einhorn was playing for charity.

The turn 2h and river Kc missed Einhorn and he became this event’s bubble boy. With his knockout, Bonomo moved up to 51 million in chips after the elimination.

No help on the turn or river and the remaining five players are in the money.

It took just two hands to go from five to three players as one of the most insane hands in WSOP history took place between Fedor Holz, Byron Kaverman, and Rick Salomon.

Byron Kaverman looked down to Ac-5c UTG and shoved for his last 8 million. Holz looked down to two black tens and made the call. Action folded to Rick Salomon in the big blind, who shoved Ah-Kh for 26.9 million.

Holz had Salomon slightly covered and went into a deep tank. Just as he started tanking, tournament director Jack Effel informed the table that Salomon’s Ah had flashed and he was required to turn the card over.

This reveal didn’t help Holz in his decision as now he had to decide whether Salomon had aces or something like A-K or A-Q. Holz went through four time extensions before finally making the call and found himself in great shape to knock out two players.

That was until the flop fell Ad-Ks-2c. Now Salomon was in the lead with two pair and was looking to more than double. The turn fell the Qc and now Kaverman had outs to triple.

None of that ended up mattering because the river fell the 10d to give Holz a set of tens and an incredible double elimination.

Byron Kaverman was the shorter stack as the start of the hand and finished in fifth place, earning $2 million. Rick Salomon finished fourth, earning $2.84 million.

Kaverman’s run was pretty remarkable considering that he skipped all of Day 1 and registered prior to the start of Day 2. He effectively made a $1 million profit in just over a day’s time.

The Big One for One Drop final table is cut in half in less than an hour.

Dan Smith tried to find some footing in this event but against both Bonomo and Holz, it seemed next to impossible. He finally moved all-in for about 15 big blinds with Qd-10d and Bonomo called with Ks-10h. By the river, Bonomo made a straight and Dan Smith was out in third.

Smith earned $4 million for his third-place run. This put Fedor Holz against Justin Bonomo for the title. Holz led 84 million to 50 million at the start of heads-up play.

The Big One for One Drop is now heads-up.

In a blind v blind situation, Justin Bonomo shoved with Ks Th as Dan Smith called with Qd Td. Smith doesn't improve, out in 3rd for $4,000,000

Justin Bonomo Wins Big One For One Drop and $10 Million

Soon after heads-up play began, Holz nearly eclipsed 100 million, making it look as if he’d fall short of the title. He then scored a huge double with A-8 against pocket fours when he spiked an ace on the turn. He then turned on the aggression and soon nearly evened things with Holz.

After giving back a few chips, he caught lucky at the right time and picked off a huge bluff from Holz. He caught two pair with 8d-4d and Holz tried to shove with king-high on the river. Bonomo made the easy call and suddenly he led 110 million to just 24 million.

Holz was down to just 10 million before finding a couple of doubles to move up over 30 million. However, it didn’t give him the momentum to mount a comeback. Bonomo ended up pulling back out to over a 4:1 chip lead prior to the final hand.

Holz looked down Ac-4s pre-flop and shoved all-in for 23.6 million. Bonomo woke up with As-Jd and made the easy call. That’s as far as the drama went as the board bricked both players and Justin Bonomo is the 2018 Big One for One Drop Champion. Fedor Holz earned $6 million for second place.

With this victory, Justin Bonomo became the third multi-bracelet winner of the 2018 World Series of Poker. In addition to his third career bracelet, Bonomo earned $10 million.

His victory also moved him to #1 on Poker’s All-Time Money List with $42.97 million in career earnings. Also, Bonomo is the first player in history to win more than $40 million in live poker tournaments.

On Tuesday, Daniel Negreanu spoke on Twitter about Bonono potentially passing him”

Probably the best thing for my quality of life is for Justin to pass me today. I’ve been in that spot for the majority of my poker career and it feels like time to stop hanging on to it. Good luck everyone! https://t.co/Zge4cT4C5j

After winning the One Drop, Bonomo spoke to the crowd and those watching on TV about the importance of donating to the charity, stating how that even a $10 donation can make all the difference for those needing clean drinking water. Also, Bonomo said he was giving his One Drop bracelet to his dad who was in attendance to watch his victory.

Bonomo’s victory in the Big One for One Drop brings the 2018 World Series of Poker to a close. It is fitting that Bonomo’s victory capped off what proved to be one of the most memorable series in history.