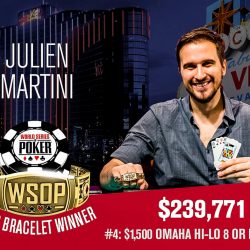 Two new bracelet winners were crowned on Sunday. Julien Martini survived a tough challenge from Kate Hoang to take down the $1,500 Omaha Hi-Lo. Also, the first online bracelet event is in the books. William “Twooopair” Reymond took down the $365 WSOP.com Online Event to win the largest online poker tournament ever held in Nevada.

The $100k NL High Roller played down to the final six with Nick Petrangelo retaining the chip lead heading into the final day. Also, the $2,500 Mixed Triple Draw Lowball Event played down to 12 players and the $10k Omaha Hi-Lo Championship drew an elite field.

The final table of the $1,500 Omaha Hi-Lo Event played to conclusion on Sunday. Four players returned with both William Kopp and Mack Lee riding super short stacks of about four bets each. Julien Martini was the chip leader with 3.7 million while Kate Hoang looked to become the first woman to win a WSOP bracelet this summer with a stack of 2.25 million.

It didn’t take long to get three handed as William Kopp got his stack in with a pair of queens with a gutshot Broadway draw. Kate Hoang made the called with bottom pair and a backdoor flush draw. Hoang caught a second pair on the turn and that was enough to send Kopp out in fourth, earning $74,058 in the process.

Mack Lee managed a couple of double-ups to try and stay in contention but couldn’t manage a prolonged run. Ultimately, he was all-in on the flop against Julien Martini with a pair of kings and a Broadway draw. Martini had trip queens. The turn gave Martini a full house and sent Lee to the rail in third to collect $104,016.

Heads-up play started with Martini holding 4 million chips to 2.74 for Hoang. Hoang put up an incredible fight to try and become the first female bracelet winner of the 2018 WSOP, but she fell short. Despite holding the chip lead multiple times, she couldn’t put Martini away and ultimately, she was all-in with Qs-7c-7h-3h against the Kd-10s-4d-4s of Martini.

A flop of Jc-10c-3s gave Martini a pair. The turn Qd gave Hoang a better pair and it appeared she might double up. However, the river fell the Kd to give Martini two pair and the bracelet. Kate Hoang won $148,150 for her runner-up finish.

This was the first bracelet for Martini, who also won $239,771 in prize money. He is the 18th Frenchman to win a WSOP bracelet.

In the end, it was William “Twooopair” Reymond who came out on top of a final table that included Anthony “nowb3athat” Spinella. He won his first career bracelet and $154,996. Reymond also now has the distinction of being the person to win the largest online poker tournament ever held in Nevada – at least for now.

William 'twooopair' Reymond wins the first online event of the summer, earning his first bracelet, his first cash and $154,995 in the $365 NLH online event.

He defeated a massive field of 2,972 entries, the biggest online field in WSOP history. https://t.co/bvM0DNlo3Y pic.twitter.com/XqlrDNwO7k

Just ten players remained at the start of Day 3 of the $100k High Roller Event with Nick Petrangelo holding a 3 million chip lead over the next closest player. We originally reported that this event would play to the bracelet on Sunday, but rather they only played down to the final six.

Chris Moore was the first player eliminated. He shoved from the button with 9h-8h but ran into the pocket aces of Andreas Eiler. Moore managed to pick up a gutshot draw on the turn but bricked the river to finish in 10th. He still earned $240,265 for his deep run.

When the start of the unofficial final table of nine started, Nick Petrangelo’s lead had grown to almost 5 million over the rest of the field. Bryn Kenney and Aymon Hata were the short stacks and in danger of being the final table bubble boy. However, it was Fedor Holz that wound up the bubble boy.

Holz had slid down to the short stack prior to being dealt pocket fives in the big blind. Elio Fox raised to 275,000 from the small blind with pocket sixes. Holz shoved for his last 1.75 million and Fox made the call. The board bricked both players and Holz went to collect his $240,265 prize.

Adrian Mateos was next to fall. He lost the majority of his stack to Bryn Kenney when he ran pocket sevens into pocket aces. That hand left him with about 400k. He then put the rest of his chips in with Qh-Jd and Elio Fox called with Kc-10d. The flop fell 10s-9s-7c to give Mateos a straight draw but Fox top pair. The turn and river blanked both players and Mateos was out in 8th, good for $295,066.

Jason Koon was the last elimination on the day. On a board of 9d-5s-2c-Qc, Koon moved all-in holding Kd-5h and was called by Bryn Kenney with Qs-Jc. The turn fell the 8h and Koon was out in seventh place. He earned $372,894 for yet another big finish in high rollers in 2018.

Play was halted with six players remaining. Nick Petrangelo finished the day once again as chip leader with 12.15 million. Bryn Kenney is now second with 10.2 million. The remaining six players will return on Monday and play it out until a bracelet is awarded.

The $100K High Roller final table will play to a winner Monday! @npetrang leads, @BrynKenney is close, and @smokrokflock goes for another 2018 bracelet.
Watch only on PokerGO!
Subscribe now: https://t.co/wtwTU6NmGw pic.twitter.com/TI7isXCHRH

Below are the final table chip counts heading into the last day’s action:

The second day of the $2,500 Mixed Triple Draw concluded on Sunday with 12 players remaining. Chris Vitch will take the chip lead into the final day with 493k. Other players in contention include Bryce Yockey, Scott Seiver, Frank Kasella, and Mike Leah

The $10k Omaha Hi-Lo Championship kicked off on Sunday and drew a field of 161. The field was thinned down to 100 by the end of the day and Chris Bjorin and Robert Mizrachi are atop the leaderboard.

The $365 PLO Giant also opened play on Sunday. The first flight of this event drew 423 and Leif Force was the most notable name advancing from the first flight.

The $565 COLOSSUS held two more flights on Sunday. Some players advancing included Alex Foxen, John Racener, and Joe Cada. Phil Ivey made an unexpected appearance in this event and played in flight D.

With the first big weekend behind us, things calm down dramatically on Monday. Day 1 of the $565 COLOSSUS continues on Monday with flights E and F. These will be the last two chances for players to advance but expect smaller fields compared to the weekend.

Also, the $1,500 Dealers Choice 6-Handed Event kicks off. This event is popular and should be stacked with pros and competent amateur mixed game players.

The $10k Omaha Hi-Lo Championship should play down to the final table on Monday and two new bracelet winners will be crowned. The final tables of both the $100k High Roller and the $2,500 Mixed Triple Draw will play to conclusion.