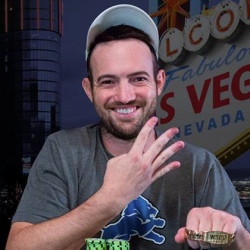 Joe Cada has enjoyed a remarkable run at the 2018 World Series of Poker. Earlier in the series, Cada won his third career bracelet after taking down the $3k NL Hold’em Shootout. Then later, he nearly became the fifth person in WSOP history to win two Main Event titles, finishing fourth in the Main Event.

Cada only had one event to try and become the second multi-bracelet winner of 2018 and he made the most of it. Early Monday morning, Joe Cada won The Closer to earn his fourth career bracelet, along with $612k. In addition, he now puts himself into solid contention for WSOP Player of the Year.

Allen Kessler Among Chip Leaders at Start of Day 2

Day 2 promised to be an insane day as the field played from 331 to a champion. One of the surprising stories of the starting flights was Allen Kessler. In a rare exhibition of NL Hold’em prowess, he managed to snag the Day 1c chip lead and was fourth in chips heading into the final day.

There were tons of other big names still in contention on Day 2 of The Closer, including Shaun Deeb, Chris Moorman, Jonathan Tamayo, Loni Harwood, John Hennigan, and prior Main Event champions Martin Jacobson and Joe Cada.

With 30-minute levels, action was fast and furious and throughout the day we lost many of the big names in the field. In fact, by the time the final table was reached, only one former bracelet winner remained, 2009 WSOP Main Event Champion Joe Cada.

Wow @cada99 plays 8 days in main and then bounces into the closer and is about to win his 4th bracelet and 2nd if summer! Can you say beast! #wsop2018

Due to the structure of the tournament, the top stacks only had about 20 big blinds heading into the final table. Cada was the chip leader at the start of the final table and managed to stay near or at the top of the leaderboard throughout much of the final.

Is Joe Cada really at another FT?! Holy crap.

As the final table progressed, it appeared that Paawan Bansal might be the player to beat as he had nearly a 2:1 chip lead on Cada and the rest of the field. However, Cada fell into the perfect situation when Bansal shoved from the small blind with Jh-7d and Cada woke up with As-8c. The board produced an eight for Cada and he took a 2:1 chip lead on the field.

Cada pushed that least to 3:1 when he knocked out Richard Ali in fourth. Ali shoved with pocket fours and Cada woke up with pocket eights. A short time later, Bansal knocked out Jeffrey Tanouye in third place to set up a heads-up confrontation.

Just 1 million in chips separated Cada and Bansal at the start of heads-up play. It only took one hand to crown a champion as Bansal decided to four-bet shove with 9d-8d. Cada woke up with another pair, this time pocket tens and made the call. A nine fell on the flop for Bansal but a turn ten gave Cada a set and another ten on the river gave Cada quads for overkill.

Joe Cada joins Shaun Deeb as the only other multi-bracelet winner in 2018. In addition to his fourth bracelet, Cada earned $612,886.

Jesus man what a legend

In addition to the bracelet and prize money, Cada earned 1,197 points towards WSOP Player of the Year. Cada had jumped up to ninth overall after his fourth-place finish in the Main Event but this victory bumped him up to fourth with 3,531.95 points. He now trails Shaun Deeb, Ben Yu and John Hennigan for WSOP POY.

Shaun Deeb finishes the Vegas WSOP with the overall POY lead and will earn the freeroll into the WSOP Europe Main Event later this year. Cada is one of the players near the top that is likely to travel to play the WSOP-E, so depending on how he runs, Deeb may have to actually perform later this year if he wishes to lock up WSOP Player of the Year.