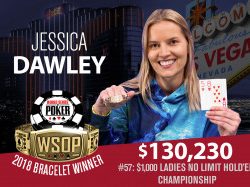 Jessica Dawley was chip leader for much of the final table of the 2018 WSOP Ladies Championship and ultimate took down the event for her first gold bracelet.

The $1,000 Ladies Championship played to a conclusion on Saturday with the unofficial final table of ten players returning and all looking to earn their first WSOP gold bracelet. Two big names made this final day. Danielle Anderson came in as one of the shorter stacks while Jessica Dawley started the day second in chips. Jill Pike started the day as chip leader.

Danielle Anderson was the unfortunate bubble woman in this event. She was on the sucker end of a straight-over-straight confrontation with Jessica Dawley. This hand put Dawley into the lead heading into the official final table.

Dawley managed to hold the chip lead for much of the final table. However, during four-handed play, she lost the lead to Jill Pike and Pike started to run away with things for a while. However, Dawley found a huge double with pocket aces against pocket sevens for Pike and this put Dawley back into the chip lead.

The pair swapped the chip lead a couple of times but then Dawley moved into a massive chip lead after doubling through Mesha James when her A-Q outran pocket tens. Dawley continued to pile onto her lead and by the time she got heads-up with Jill Pike for the bracelet, she held over an 8 to 1 chip lead.

Pike slid further before finally putting her last 4.5 big blinds into the pot with Kh-4h and Dawley called with 8h-5h. Dawley caught a five on the flop and that pair was good enough to give Dawley her first WSOP bracelet.

This is Dawley’s first major live tournament win and a boon for the Ladies Event. It is fantastic to see a relatively well-known tournament pro take down this event as it helps to elevate the prestige and the visibility of the event.

In addition to her first WSOP bracelet, Dawley earned $130,230, a new career best. She now has $713k in live tournament earnings.

Razz is one poker variant you seldom see spread by itself outside of the World Series of Poker. Luckily, Razz lovers get two events each year to test their skill with the $10k Razz Championship being the one most pros turn out for.

The final table of this event played down to heads-up on Friday but fell short of completion. The final table was stacked with big names including John Hennigan, Mike Leah, and Julien Martini.

It was Calvin Anderson and Frank Kassela that returned on Saturday to play for the bracelet. Anderson has 4.58 million to just 1.37 million for Kassela. Bets were 150k/300k, meaning that Kassela only one big hand he could play and hope to double.

Sadly, this didn’t happen to him. Instead, he lost all but 60k of his stack on the third hand of play. He made a 9-8 by the river but Anderson managed to river a 9-7 to take the hand. Kassela was left with just two antes.

Calvin Anderson won his second career WSOP bracelet in this event along with $309,220. His first bracelet came in 2014 in Stud Hi-Lo. Now all he needs to complete the WSOP Stud Triple Crown is to win a Seven Card Stud bracelet.