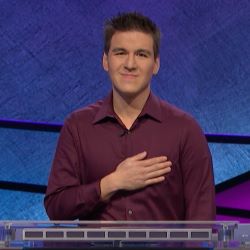 Quite a few celebrities play an event or two at the World Series of Poker. Ray Romano and Brad Garrett have been known to play a few, Jason Alexander returns regularly to try for a bracelet, and famous athletes can be found among the entrants on any given day.

On Monday, June 24, though, the most famous game show player of the year showed up at the Rio in Las Vegas to play a WSOP event. James Holzhauer put his Jeopardy! fame on the line to partner with Mike Sexton to play the NLHE Tag Team tournament.

The duo shared a love for charity, so they pledged 50% of their winnings to a Las Vegas-based charity close to Holzhauer’s heart.

They also had something else in common as they played the WSOP on Monday. Both men wore patches showing their affiliation with PartyPoker.

I’m going to be playing in the tag-team event @wsop with @James_Holzhauer on Monday. Come see if you can beat us! We’re donating 50% of our winnings to Project 150 (they assist homeless teens in the valley). Gonna be a fun day! ?? #wsop #Project150 https://t.co/RFMeWbHQzT

James Holzhauer was born and educated in Illinois, eventually graduating with a mathematics degree from the University of Illinois at Urbana-Champaign in 2005. He eventually moved to Las Vegas, Nevada, and lived as a professional sports bettor.

Meanwhile, Holzhauer appeared on several televised game shows, but it wasn’t until his 2019 run on Jeopardy! that he became a household name.

Using a gambling-based strategy and studying for one year prior, Holzhauer made 33 appearances on the show and won more than $2.4 million overall. He nearly overtook all-time Jeopardy! winner Ken Jennings in prize money but was ultimately defeated on June 3, 2019, by Emma Boettcher.

Holzhauer was no stranger to cards, playing a fair amount of Hearts and Spades at card clubs during college, as well as playing in a regular home poker game.

Teaming with Sexton and PartyPoker

The partnership was quite natural.

Mike Sexton is a longtime poker pro who recently re-affiliated with PartyPoker after years apart. He is also a sports bettor. He lives in Las Vegas. And he watched Holzhauer make his run on the game show.

He invited Holzhauer to lunch in the previous weeks to talk about playing at the WSOP. Holzhauer agreed, and Sexton cleared it all with PartyPoker that the Jeopardy! champion would also wear a PartyPoker patch for the tournament.

The two agreed to play Event 57, which was the $1K buy-in No Limit Hold’em Tag Team tournament. Both players shared the buy-in to play as a team.

As it turned out, PartyPoker put a bigger plan on the table for Holzhauer that seemed to have included the WSOP Main Event, but Holzhauer has a vacation planned during that time and won’t be able to play. So, he played Event 56, the $1500 NLHE Super Turbo Bounty tournament before the Tag Team event, both scheduled on the same day.

PartyPoker also invited him to the $10K PartyPoker MILLIONS Main Event that is scheduled to take place in the Bahamas this November. It is unclear if he has committed to that.

At a press conference before the tournament, Holzhauer noted lightheartedly, “It would be nice if I don’t embarrass myself. But I’m just really hoping to have a good time, and if I happen to win, then, you know, that’s gravy.”

And to help him along, he asked some of friends who are poker pros for assistance. “Several friends who are bracelet winners have been giving me quick coaching sessions.”

In the immortal words of Joe Maddon, try not to suck. #WSOP pic.twitter.com/RrXyeJXlhx

When Holzhauer partnered with Sexton to play the WSOP Tag Team event, he pledged half of any winnings to Project 150, a move encouraged by his wife, Melissa.

“There are 6,400 homeless teens and communities that really need assistance with everything – food, clothing, a place to sleep at night, basic essentials, toiletries – all the things that high schoolers take for granted,” Holzhauer said. “They are giving these teens a shot at breaking the cycle of poverty.”

Project 150 is a nonprofit founded in 2011 to help about 150 homeless high school students. The organization has grown to help thousands of homeless, displaced, and disadvantaged high school students at 58 high schools in the Southern Nevada area. The group’s mantra is: High School is Tough Enough.

Holzhauer is no stranger to charitable giving, though. He donated some of his Jeopardy! winnings to a variety of Las Vegas organizations, many dedicated to children. He had already donated $40K to Project 150, contributing to a total of more than $300K to charities in total.

Poker with a Purpose

For those interested, @James_Holzhauer is off to a good start @wsop $1500 turbo with 65k in chips at second break. As for our tag-team, I’m holding down the fort, up 600 nearing 1st break. Go James! For the kids! ? #wsop #Project150 #partypoker

He played for nearly six hours and just missed the money. The biggest hit against his stack happened when his pocket sevens lost to an opponent’s fives with a five on the flop. The last of Holzhauer’s chips went in on the next hand with K-J against K-10, and a ten hit on the board.

According to the Las Vegas Review-Journal, Holzhauer said the two words that most players have uttered at one time or another: “That’s poker.”

Holzhauer then headed to the Tag Team NLHE tournament to meet up with Sexton. The two played for a few hours, but when Holzhauer went to dinner, Sexton lost with A-K to tens. The duo was eliminated without any profit.

Sadly, I lost 2 races in a row & our ‘dream tag-team’ hopes are over. Special thx to ⁦@James_Holzhauer⁩ @wsop @partypoker @Project150LV & to the media who attended today’s press conference for making it a special day. Hopefully, we brought some awareness to the charity. ? pic.twitter.com/Xqsae8tkCo