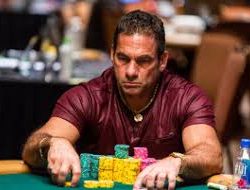 The $25k PLO High Roller played down to a final table on Friday. James Calderaro, last year’s champion, is second in chips heading into the final and has a great shot to repeat. Leading the final table is 1998 WSOP Main Event winner Scotty Nguyen. Sean Deeb, Ben Yu, Jason Koon and Ryan Tosoc are also looking to take the title and the massive $1.4 million top prize.

Also, John Hennigan’s recent run has vaulted him into first for the 2018 WSOP Player of the Year race. He presently leads Elio Fox by over 556 points. Chris Ferguson is well out of the running this year, presently 84th.

Event #42, $25,000 PL Omaha High Roller kicked off on Wednesday with a field of 230 entries looking to become the second ever PLO High Roller winner. Last year, James Calderaro won the inaugural $25k PLO High Roller and he returned this year looking to take down the event.

Through two days, the field was trimmed down to 35 players with play concluding on Thursday after an extensive bubble period. Those 35 players returned on Wednesday looking to make the final table. Ben Yu led a stacked field of players that included some of the world’s top players, including Erik Seidel, Mike Leah, Tom Marchese, Paul Volpe, Robert Mizrachi, Jason Mercier and Craig Varnell.

Two of the most notable names to make Day 3 play was 1998 WSOP Main Event winner Scotty Nguyen and last year’s champion Calderaro who is looking to repeat as champion. After a long day of play, the final table was reached.

David Benyamine was the last player eliminated on Day 3 as he was all-in with a wrap straight draw but behind a bigger wrap draw and top pair for Scotty Nguyen. The board bricked both players and the final table of six was reached.

That final pot was enough to move Nguyen into the chip lead heading into the final table on Saturday. James Calderaro and Shaun Deeb are right behind. Ben Yu, Jason Koon, and Ryan Tosoc also made the final.

Play will resume at 2 pm on Saturday and continue until a champion is crowned. The winner of this event will receive the bracelet and $1.4 million in prize money.

Day 3 of the the $25,000 PLO High Roller is done for the night as @TheScottyNguyen leads defending champion @bigshowwwcaldo. @JasonKoon @shaundeeb @benyupoker and Ryan Tosoc return Saturday at 2pm, @PokerGO starts at 3pm https://t.co/cfS29qR4ni

Below are the final table chip counts heading into play on Saturday:

John Hennigan Takes Lead for Player of the Year

There’s a new leader in the 2018 WSOP Player of the Year race and it is five-time WSOP bracelet winner John Hennigan. Johnny World has enjoyed a phenomenal run thus far with six cashes, three final tables, a runner-up finish in the $50k Poker Player’s Championship, and a bracelet victory in the $10k HORSE Championship.

Hennigan now holds a 556 point lead over Elio Fox in the race for WSOP Player of the Year. Afterward, there’s quite the gap with the remaining players behind by more than 800 points. Eric Baldwin is presently in 3rd with 1,738.42 points, 828 points behind Hennigan.

The @WSOP is starting to feel like the World Series of "Johnny World" and @RemkoRinkema updates the wild run that has John Hennigan atop the Player of the Year standingshttps://t.co/0sZpUoeKjw

Fox has stalled since taking the POY lead early in the series. After winning the $10k Super Turbo and finishing runner-up in the $100k High Roller, he’s only managed one other cash. He finished 92nd in the Millionaire Maker.

Baldwin has six cashes so far this series, but his only significant ones are a 22nd place finish in the $3k Six-Max and his bracelet win in Event #37, the $1,500 NL Event.

Of course, there is still plenty of time for another player to try and catch up and take over the top spot. There are still 31 events left to play in Las Vegas, plus all ten events to come at the WSOP Europe.

The player who finishes at the top of the leaderboard after Las Vegas will receive an automatic entry into the WSOP Europe Main Event.

Chris Ferguson, the 2017 WSOP Player of Year, is currently 84th and 1,792 points out of first. He will need to win an event plus make a final table or two to catch up at this point, which is just fine by most in the poker world.