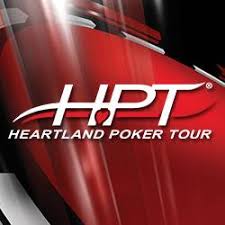 By all accounts, the Heartland Poker Tour seems to be gone. Without so much as a goodbye, the original mid-stakes poker tour catering to middle America since 2005 closed.

We reached out to HPT contacts via social media, but most of those accounts now appear to be inactive. No one responded to any inquiries.

Of course, the coronavirus pandemic hit the live poker world extremely hard, forcing all of them to cease live operations for nearly a year. It was difficult for everyone involved, from executives to dealers and players. Some people had to exit the poker world and find other work.

HPT was not exempt. And the pandemic seemed to destroy the tour. It could come back, of course, but there is no current indication that anyone is working for the company or answering any inquiries.

The Heartland Poker Tour held one of its last tournament series in St. Louis in late February 2020. The tour then headed to Hollywood Casino for a mini-version of the HPT in Toledo in early March. But just a few events into the action, they had to stop and postpone the rest of the series.

Due to recent developments related to the coronavirus, the remainder of the current Mini Series at @HollywoodToledo is canceled, effective immediately.

We apologize for any inconvenience this may cause and look forward to seeing you all on the felt again soon.

Two days later, HPT postpone its upcoming events in Indiana. The months that followed brought more cancellations/postponements in Missouri and Colorado. In July 2020, HPT stopped posting anything on Twitter and Facebook.

At some point, every postponement turned into a cancellation. Casinos didn’t begin resuming live poker until late 2020, but by then, it was too late for the Heartland Poker Tour.

The HPT’s Facebook page had accumulated more than 20,000 fans through the years. Whoever handled social media for the tour wrote the last message on that page on July 3:

“The August 6-17 event at Hollywood Casino Lawrenceburg has been postponed to a later date. We’re anxious to get back on the road and see all of you soon. Stay safe!”

The Twitter account showed the same message, followed by a birthday wish to poker pro Vanessa Selbst on July 9. That was the end of those social media accounts.

And when we tried to log on to the HPTpoker.com website throughout the first months of 2021, we saw that an error message had replaced the tour’s hub of information.

A person on Twitter linked to a letter from the Heartland Poker Tour to Lisa Marshall at the Missouri Department of Higher Education and Workforce Development. It noted that the company reduced its workforce by laying off three people on September 20, 2020. “This layoff will be permanent,” the letter said. It went on:

“These layoffs at Heartland Poker Tour are the unfortunate result of Covid-19 related business circumstances that were sudden, dramatic and beyond our control. The impact on our business was not reasonably foreseeable until now. We simply could not foresee that the initial closures of our properties … ultimately spread throughout all the states in which we operate and eventually be extended, interrupting almost all business and travel temporarily. … Finally, we could not have anticipated when our properties would be allowed to reopen and how restrictive the new operating conditions would be, and the negative impact this would have on business volumes.”

The Heartland Poker Tour had just kicked off its 16th season in January 2020. The first stop of the year was Ameristar East Chicago. It all kicked off with good attendance and finished with a familiar poker face as the stop’s champion: Greg Raymer. He became the first five-time HPT champion by winning that Main Event.

The next stop for the tour was actually a cruise. The HPT High Seas series took place on a cruise ship in partnership with Card Player Cruises. Jennifer Gianera won that Main Event. That led to a series at Golden Gates in Colorado, where John Reiter won the Main Event.

Later into February 2020, Hollywood Casino in St. Louis pulled in a lot of players and crowned Kevin Garosshen as its Main Event champ. That was the final HPT series reported to the Hendon Mob to be included in its database.

HPT was the original mid-major poker tour in America. It set the standard for live poker that was more affordable for the average poker player and closer than coastal casinos that typically hosted tournament series. HPT went to smaller casinos in the heartland of America, and it put them on television and live streams before most others did.

In the past decade, however, other tours gained popularity and provided hearty competition for the HPT. The WSOP Circuit and WPTDeepStacks were two of the major ones, but others like the Mid-States Poker Tour and RunGoodPoker Series did the same. All of them were unique, and they provided more options in the market.

After 15 full seasons of tournaments that started during the poker boom, the Heartland Poker Tour seems to have simply and quietly folded.