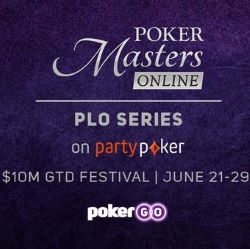 Since poker players took to online poker in droves thanks to a certain pandemic that will go unnamed (you know who you are), poker operators have upped their games…literally. Poker sites of all sizes and in all markets have increased the offerings for both cash games and tournaments.

With that said, June was a particularly good month for tournament action, especially for PLO players. Poker Central teamed up with PartyPoker to offer the inaugural Poker Masters Online PLO Series, and it ran June 21-29.

There were 15 unique tournaments on the schedule, though each had a mini and standard version. None of the events were exactly mini for many players, as the lowest buy-in was $500, but high-stakes players had their pick of PLO events with buy-ins of up to $50K.

Poker Central only reported on the highest buy-in tournaments, those in the $10K-$50K buy-in range. Each of those events ran two days and offered a sizeable guarantee. The final tables were also livestreamed live with commentary on PokerGO.

The results of those events were as follows:

Parssinen Takes Player of the Series

The players who participated in the series garnered points for each in-the-money tournament finish. They played for a $50K cash prize and the coveted Poker Masters purple jacket. Poker Central also awarded the Player of the Series winner a ticket into the $50K Main Event.

That player was Eelis Parssinen of Finland. Despite Jens Kyllonen winning three of the high roller events, he only finished third in the series, as those wins were his only cashes. Parssinen beat out Andras Nemeth for the title by one point.

The final standings were:

Poker Central also reported that the Mini Poker Masters PLO Series drew a solid turnout, and Dante Fernandes of Brazil won the most in those events, collecting $99,194 in his seven cashes that included three titles.

The $5K Mini Main Event tallied 118 entries, and it paid out the top 18 players, including names like Sam Trickett, Nemeth, and Kyllonen. Ultimately, Fernandes finished in second place in that event and Alexander Petersen won it for $148,624.

Not enough to catch the Purple Jacket winner Eelis Parssinen. A win, two 2nds, two 3rds, and a 5th to finish with 625 points. Nemeth with 624, Kyllonen with 612