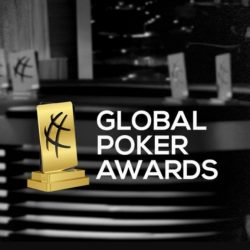 Remember things that happened before the pandemic? In addition to hugging and socializing, eating in restaurants and going to concerts, there was also a vibrant poker industry. It included live tournaments around the world, poker seminars and parties, players were vlogging, and there were things like awards ceremonies.

That was all before March 2020. During the first week of March, not long before the pandemic spread across the United States and shut down nearly everything, the Global Poker Index and Hendon Mob Database partnered with PokerGO for the Second Annual Global Poker Awards.

It was on a Friday night at the PokerGO Studio at the Aria in Las Vegas. It was a red-carpet affair hosted by GPI/THM President Eric Danis, Maria Ho, and Drea Renee. The ceremony honored about two dozen people and events that stood out as highlights of the previous year.

Then, the pandemic and nothing and quarantines and blah blah… Danis even noted that live tournament attendance dropped 85% from March 1 through December 31, 2020, as compared to the previous year. To host an awards ceremony without live tournament action was…well…not a great idea.

However, by the start of 2021, poker rooms were beginning to reopen. Casinos were restaffing, poker tours were looking at their calendars, and poker players were pulling their bankrolls out of shoeboxes under their beds.

That means the Global Poker Awards is back, too.

This week, PokerGO announced a partnership renewal with Global Poker Index (GPI) and The Hendon Mob (THM) for the next Global Poker Awards through 2024. They will be held each year, resuming in March 2022 and continuing to 2023 and 2024.

The ceremonies will take place at the PokerGO Studio in Las Vegas and stream live on PokerGO.

Danis noted, “We are honored to be a part of celebrating the accomplishments of the most renowned figures in the poker industry. After having to cancel this year’s ceremony due to the pandemic, we are so excited to welcome the poker world once again to the Global Poker Awards in March 2022 and for years to come.”

We have partnered with @gpi and @TheHendonMob to present the Global Poker Awards through 2024 in the PokerGO Studio at @ARIAPoker🎉https://t.co/Eldmn05cPG

Danis is wasting no time. He is already looking a year ahead to the 2022 Global Poker Awards.

Some of the awards already on the table are:

-GPI Player of the Year

-GPI Female Player of the Year

-People’s Choice Award for Hand of the Year

The voting process will likely mimic that which determined the last Global Poker Awards, with a lot of fan participation in choosing nominees. In fact, poker players and fans are encouraged to contact the GPI at any time of the year with hands, tweets, articles, or anything that might qualify for an award.

As Danis noted in the video announcement, the ceremony is a time when the poker community can honor the best among us, not to mention put away the hoodies and dress up for a fun evening.