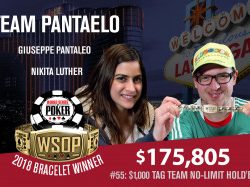 We are in the home stretch of the 2018 World Series of Poker with two more events reaching a conclusion on Friday. Diogo Veiga is in the middle of a breakout year and after earning his largest career cash just a couple of months ago, he has now won his first major live poker title after defeating Barry Hutter heads-up for the $3,000 Big Blind Ante NL.

Meanwhile, the $1,000 NL Hold’em Tag Team Event concluded with Giuseppe Pantaleo and Nikita Luther taking down the gold. Luther becomes the first woman to win an open-field WSOP bracelet in 2018.

Several events featuring a Big Blind Ante are being run this summer and the $3,000 Big Blind Ante NL Event concluded on Friday. Barry Hutter led the final four players and was looking for his second career WSOP bracelet.
The only player in striking distance was Diogo Veiga who was only about 8 big blind behind. Play quickly went from four players to two with Jonathan Abdellatif finishing fourth and Radoslav Stoyanov finishing third.

At the start of heads-up play, Hutter had a three million chip lead and quickly jumped out to almost a 5 to 1 chip advantage. Viega then started a rush with a double when he flopped a six-high straight against a flush draw for Sutter. The straight held but Viega had a long way to go to get back into contention.

Viega’s rush continued and he continued to win pot after pot until he found himself in the chip lead. Once he moved into the chip lead, he never relinquished it and while Hutter tried to make a comeback, he just couldn’t get any momentum going.

Hutter found a great hand in A-10 to put his chips in and was in great shape against K-10 for Viega. Viega’s good fortune continued as he proceeded to bink a king on the flop and that pair of kings held to give Viega the title.

Three months ago, Diogo Viega scored the largest cash of his live career by finishing sixth in the partypoker MILLIONS Grand Final Barcelona. Now he has earned his first major live poker title. In addition to his first career WSOP bracelet, he earned $522,715.

The $1,000 Tag Team NL Hold’em Event also concluded on Friday. The Tag Team Event brings together teams of two to four players with players tagging in and out as needed. When play began on Friday, 28 teams remained.

Among the notable teams still in the field included the teams of Loni Harwood, Kelly Minkin, and Haixa Zhang along with teams including Cord Garcia, Giuseppe Pantaleo, and Ryan Laplante.

The all-woman team of Harwood, Minkin, and Zhang all made the final table but were the first eliminated, finishing in ninth.

Eventually, it was the team of Giuseppe Pantaleo and Nikita Luther facing the team of Kazuki Ikeuchi, Hiroki Iwata, and Sho Mori. At the start of play, Team Pantaleo had a 1.2 million chip lead but soon extended that lead to 9 to 1.

Team Ikeuchi managed a double and got a few chips back, but they never were able to get back into the lead. Finally, Hiroki Iwata put the last of their stack at play with Ad-9d and Pantaleo held pocket deuces. An ace on the flop gave Team Ikeuchi the lead. The turn missed both but a river deuce gave Pantaleo a set and the bracelet.

Giuseppe Pantaleo and Nikita Luther win the $1,000 Tag Team Event for their first career bracelets and $175,805. Luther is the first woman to win an open-field WSOP event in 2018 and the second woman to win a bracelet this summer.