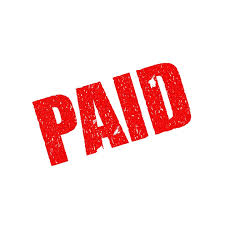 The process of players recovering from Black Friday, at least financially, is finally winding down and looks as if it could be complete by the end of 2017.

Garden City Group did not post a new update, but former players on Absolute Poker and/or UltimateBet online poker sites are reporting via social media that payments are being recorded in their bank accounts this week. This is the next round of payments since the process began less than six months ago.

If you were part of the AP/UB settlement, you may want to check your email/bank account https://t.co/8xrkgrzhuR

Players took to social media after Black Friday, when the last of the major online poker sites were seized by the Department of Justice in the United States and player funds were seized. Facebook and Twitter, mostly the latter, became a way for poker players to connect in their frustration, anger, and confusion. It took many months for players to receive answers about their funds that were trapped in their online poker accounts on PokerStars and Full Tilt Poker, while the victims of Absolute Poker and UltimateBet were left with no answers.

As the years passed since that fateful day in 2011, PokerStars players were secured and Full Tilt players were made whole by the fines that PokerStars paid to the US government. It all happened through Garden City Group, which was assigned by the Money Laundering and Asset Recovery Section of the Department of Justice to investigate player accounts on the internet poker sites, determine their legitimacy for repayment, and issue funds to their bank accounts. The process was unlike anything ever undertaken by the federal government, so it took years to complete the many steps involved in repaying victims of Full Tilt.

The unexpected result was money left over in the government account from the PokerStars fines. Millions of dollars remained. Meanwhile, there was no one who took responsibility for the abandoned players of Absolute Poker and UltimateBet. The DOJ stepped in and decided to use the leftover funds to reimburse those victims as well. That news broke in April 2017.

The work of Garden City Group then continued to verify the account balances of those who disputed their reported amounts with some type of documentation or evidence. The process had been so streamlined by that point that verifications took place quickly in August and September. And by the last days of September, players reported on Twitter that the payments were showing up in their bank accounts.

For those who believed they may never receive a remedy from the failed poker sites, the last two months have provided intense relief. Whether players had tens of dollars of thousands of dollars stolen by AB and/or UP, they had written off that money years ago, meaning the recent repayments were a welcome surprise.

It is not often that the US government takes an action that makes people happy, but this – with the help of the many millions of dollars paid by PokerStars in fines – was one of those times.

On September 11, Garden City Group posted its most recent update. It noted that the final deadline for petitions had passed, as it was set for September 7, but people were given a final chance to petition for a refund. “GCG will continue to accept petitions, but late filings will be subject to review at a later date and at the sole discretion of the Department of Justice.”

The disclaimer was the official statement, but with money remaining in the government account and time on the calendar before the end of 2017, Garden City Group is likely to process those late claims, especially ones without challenges or need for documentation. The quickness with which GCG handled the most recent batch of petitions with disputes involved indicates a desire and willingness for the claims administrator to pay as many players as possible before closing the account.

While it is nearly one month past the official final deadline set by GCG, former AB and UP players may want to take the time to file a petition if they have not yet done so. It may be the last chance to see any of the money confiscated by the US government from the failed and rogue Absolute Poker and Full Tilt sites.

Players can visit the GCG website and follow instructions to submit a claim, email info@absolutepokerclaims.com, or call 1-855-907-3254.