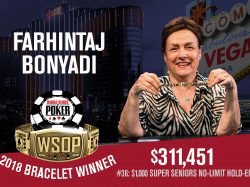 Wednesday was an epic day at the Rio. Farhintaj Bonyadi overcame a 4 to 1 chip lead to win the Super Seniors Event. She is the first woman to win a WSOP bracelet this summer and she also now part of a historical achievement.

Farhintaj Bonyadi became the first woman to win a WSOP bracelet this summer after taking down the $1,000 Super Seniors Championship on Wednesday. Bonyadi had made it to heads-up play against Robert Beach on Tuesday but play was suspended heads-up.

Beach came into the final day with more than a 4 to 1 chip lead but Bonyadi started to chip away at Beach’s lead. Over the course of the next 75 hands, she ground her way into the chip lead and it was all downhill for Beach from there.

Eventually, Bonyadi had more than a 2 to 1 chip lead prior to the final hand. In the final hand, Boyadi moved all-in with a seven high straight showing on the board. Beach made the call holding 9s-7s and played the board. Bonyadi showed pocket eights for an eight-high straight and she became the first woman to win a WSOP bracelet in 2018.

Mother of three-time bracelet winner, Farzad Bonyadi, Fahrintaj Bonyadi gets one of her own in the Super Seniors. https://t.co/mLnVWsr3n5 pic.twitter.com/OryzRnhSoY

Farhintaj Bonyadi is no stranger to the Rio, having performed well in the Daily Deepstack events in recent years. Now she can add a WSOP gold bracelet to her resume. In addition, she won $311,451 in prize money.

James Obst, Joseph Cappello, and Lars Gronning started the day as short stacks and were the first three players eliminated. Matt Grapenthien had perhaps the most experience in Stud at the final table but couldn’t get a prolonged run going. In the end, he fell in fifth place when he was unable to outdraw a lowly pair of fours from Ben Yu.

Lee Salem finished in fourth place when he failed to outdraw trip threes from Jesse Martin. Ben Yu then fell in third place. He was all-in on third street and watched as Yaniv Birman drew a wheel in five. Yu could only muster a pair of tens and heads-up play began between Yaniv Birman and Jesse Martin.

Birman started heads-up play with the chip lead and never relinquished it. Martin struggled to win chips and steadily lost chip to the point where he was finally left with just one small bet of 50k. He put that in with a jack against a queen and was only able to pull a pair of threes by the river. Birman managed to pull a pair of nines and that was good enough for the win and the bracelet.

Yaniv Birman only had $34k in live earnings prior to this event. Back in 2014, he finished 6th in the $1,500 Stud. He won more than seven times his career earnings in this event, taking home $236,238 and his first WSOP bracelet. Birman admits that he rarely plays poker anymore and primarily focuses on being a businessman. However, Stud is his best game and he proved that with his first bracelet win the Stud World Championship.