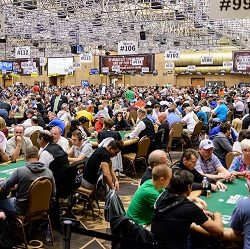 On Sunday, August 26, EA Sports hosted a tournament for Madden NFL 19 players at the GLHF Game Bar in Jacksonville, Florida. The video gaming event for the Madden Championship Series was a qualifier for the Madden Classic finals, which was set for October in Las Vegas.

Not long after 24-year-old David Katz lost his game and was eliminated from the tournament, he reentered the tournament area, pulled a handgun, and shot at his competitors before killing himself. The result was death for 22-year-old Elijah Clayton and 28-year-old Taylor Robertson, and nearly a dozen others being treated for a range of wounds.

According to CNN, the shooter carried two handguns and extra ammunition into the tournament but only used one. Possible psychological issues were in play, but a police investigation remains underway to try to determine the man’s motive. He was an avid video gamer, but there have been no comments by former competitors about incidents during previous competitions.

There were to be three more qualifiers before the October finals, but EA (Electronic Arts) cancelled those events as the company examines its security protocols.

Our three remaining Madden Classic qualifier events are cancelled as EA confronts this tragedy and reviews safety protocols for competitors and spectators.

This was the right call. Really proud to see how EA stepped up and is focused on keeping us safe. #WeAreMadden https://t.co/O5bnECSK5d

Meanwhile, players and fans of esports and all types of gaming have considered and expressed concerns about the possibility of this type of tragedy occurring at their live events.

Soon after the Jacksonville shooting, a thread was opened on the Two Plus Two forums to discuss it, though it was moved from the popular “News, Views, and Gossip” forum to “Other Topics.” The first commenter wrote, “I feel that it’s only a matter of time before someone targets a poker event,” to which the original poster, poker writer David Huber, responded, “This is the initial reaction from some poker players on Twitter as well.”

I can't believe we have shootings happening at E-sports events 🙁 so fucked up.

Over losing a video game??? I used to play in Madden tourneys when I was younger, can't imagine someone getting killed during one.

I hope something like this NEVER happens in the poker room 🙁

“I’ve been saying this for years. Posted about it here a bunch only to be generally mocked as being paranoid. Or a typical naive response of ‘why would anyone target poker players?’

“I’ve also contacted the WSOP 2-3 times per year via email and twitter for the last 5 years or so voicing my concerns. I make it clear that I don’t expect details of their security measures but a response saying precautions have been taken would suffice. No responses ever.

“I know it’s unpopular but we really need metal detectors at the doors, increased security, and increased use of dogs. You have a lot of money on the line, emotions running high, out of control egos, and guys being free to wear large backpacks all over the place. Recipe for disaster.”

Huber also posted notes from a video interview with one of the players in the Madden NFL 19 tournament, which showed that the “warning signs” exhibited by the shooter could have easily come from any angry poker player. The shooter was described as being “weird all weekend,” wearing the same clothes on both days of the event, and refusing a handshake with the player who defeated him.

@TabDuchateau @BorgataPoker was wondering if @Borgata has or going to implemented any security changes for their poker events, in light of the events that happen in Jacksonville. To easy for someone to walk into the poker room and unload. #worried

One of the Twitter responses to the Jacksonville shooting came from PartyPoker Ambassador and longtime poker pro Mike Sexton.

It’s a sad state of affairs but it should be obvious by now that if we want to curb senseless shootings (inside buildings anyway), we need to install metal detectors at every school, arena, & store/building where there is substantial traffic. #toomanynutcases #solutionsneeded

While he didn’t specifically mention a poker room, CardPlayer did obtain further comment from Sexton about his feelings regarding poker room security. “Sadly, I’ve always worried about some poker player who went broke or felt he got a bad ruling to come back and start blasting. It’s a concern. I predict casinos will go to metal detectors in the not too distant future.”

Others have spoken to this author about the same fears. The vast majority of casinos have no metal detectors, and while some have security personnel, there are no bag inspections upon entry to most poker rooms or tournament areas.

Most poker players don’t want to believe that a mass shooting will take place in their sacred spaces, and casino patrons generally feel the same. However, the lack of restrictions for these events – whether a typical weekend night at a California cardroom or a summer day at the World Series of Poker with thousands of players in a ballroom – presents safety concerns that may want to be revisited. Poker is a game that can produce extreme emotions and reactions, especially when entire bankrolls and a great deal of prize money is on the line.