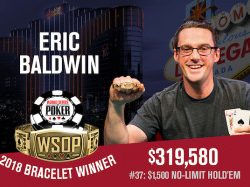 Thursday was insanely busy at the Rio with four events awarding bracelets. Robert Peacock took a dominating lead into three-handed play and sealed the deal to win his first title in the $1,000 Double Stack NL Event.

Eric Baldwin returned to play heads-up against Ian Steinman for the $1,500 NL bracelet. Baldwin was able to claim his second career bracelet in this event, his first since 2009. Scott Bohlman dominated the final of the $2,500 Mixed Big Bet for his first career bracelet.

Like many final tables at the 2018 World Series of Poker, the $1,000 NL Double Stack Event needed another day to complete. Just three players remained with Robert Peacock holding over a 3 to 1 chip lead over Nicholas Salimbene and Joshua Turner.

Down to just six big blinds soon after play began, Turner shoved pre-flop with K-Q but ran into pocket threes from Peacock. The threes held and Turner was out in third.

Robert Peacock had more than a 5 to 1 chip lead going into heads-up play against Nicholas Salimbene and he never lost any ground. Salimbene was soon down to just 10 big blinds and put those at risk with Kc-2h. However, Peacock had him dominated with Kh-Qh. The board failed to produce a deuce and Salimbene finished runner-up, good for $397,908.

Peacock is typically a cash game pro, but this time around the wound up winning his first WSOP bracelet along with $644,224. That should give his cash game bankroll a healthy boost.

We are so used to reporting on the various gimmick or Hold’em variations, it seems a bit odd to be reporting on a normal $1,500 NL Event but that’s what we had in Event #37. The final table played down to heads-up on Wednesday and Eric Baldwin returned to battle Ian Steinman heads-up for the bracelet on Thursday.

Baldwin had almost a 3 to 1 chip lead when action resumed. Steinman fought hard but ever time he started getting traction, he’d lose ground. It took a bit of a cooler to finish him off. In the final hand, Ian Steinman was all-in with pocket kings and racing against Baldwin’s As-Js. The flop missed both players but the turn Js gave Baldwin some additional outs.

The river fell the Ac to give Baldwin the hand and his second career bracelet. Steinman earned $197,461 for his runner-up finish.

Eric Baldwin won his first bracelet in 2009 in a $1,500 NL Event and it took him 9 years to repeat that feat. This event gave him his second career WSOP bracelet and $319,580 in prize money. The win also moves him over $6 million in live tournament earnings.

The final table of Event #49, $2,500 Mixed Big Bet, also played out on Thursday. Scott Bohlman had a massive 4:1 chip lead with five players remaining and went on to dominate and eliminated every player at the final table en route to winning his first career WSOP bracelet.

Two bracelet winners made the final table of this event. Marcel Vonk finished in fifth when his kings were unable to improve against trip aces in NL Five-Card Draw. Ryan Hughes started the day second in chips, well behind Bohlman and managed to make it to heads-up play.

Hughes went into heads-up as a 4:1 underdog and couldn’t get anything going. Ultimately, he lost the rest of his chips in a Big O hand where his pair of aces were crushed by trip nines from Bohlman.

Scott Bohlman has been a fixture at the WSOP since 2005 and had a couple of final tables prior to today, but this time around he managed to snag his first career WSOP bracelet. In addition to the bracelet, he won $122,138.

The final table of the $1,500 NL Hold’em Shootout was the last event to play to a conclusion on Thursday. Like all shootout events, all you have to do to win a bracelet is win three tables.

This final table was ten-handed with all stacks within one or two big blinds of each other. Anthony Reategui was the only prior bracelet winner at the final. Other notables included Dylan Linde and Young Phan.

Phan fell in sixth when he ran As-2d into pocket queens from Anthony Reagetui. Phan flopped an ace but Reagetui turned a set to take the hand. Dylan Linde was knocked out in fourth after running pocket tens into the pocket kings of Corey Dodd. Anthony Reategui wouldn’t earn his second bracelet in this event. He finished in third when he ran Ah-7c into the pocket aces of Preston Lee.

At the start of heads-up play, Preston Lee held a 2 to 1 chip lead over Corey Dodd. Dodd put together a nice comeback to bring the stacks to even. Afterward, the pair fought tooth and nail for hours with both holding the chip lead multiple times.

Finally, Lee was able to get a sustained run and ground Dodd down to less than a big blind. Dodd’s final hand was 6-3 offsuit and it was unable to outrun the 9-5 of Lee. After a twelve and a half hour final table, Preston Lee had his first WSOP bracelet and $236,498 in prize money.