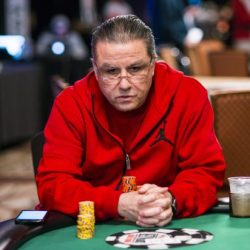 Tuesday was a busy day with two new bracelet events commencing and three others continuing their march to the final table. Eli Elezra is in contention for his fourth career bracelet in the 10k Omaha Hi-Lo Championship while John Racener is among the big names still in the COLOSSUS.

At the start of play on Day 3 of the Omaha Hi-Lo Championship, 22 players remained with Eli Elezra holding a sizable lead over the rest of the field. While the field was thinned down to the final six, little changed atop the leaderboard.

The remaining field was stacked with pros and some of the best Omaha players from around the world. Some of the players that fell short of the final table included Daniel Alaei (21st), Chris Bjorin (18th), Mike Gorodinsky (16th), Mike Matusow (11th) and Jesse Martin was the final table bubble boy, finishing in 10th.

Three players needed to be eliminated before the end of play. Per Hildebrand, Dan Zach and Robert Mizrachi all fell to bring the field down to the final six.

Eli Elezra finished Day 3 still in the chip lead and with 880k more than the next closest player. Paul Volpe and Viacheslav Zhukov are both still in the hunt at this final table and each is looking to snag their third bracelet.

Elezra is looking to win his four career bracelet and is in great shape to do so on Wednesday. Below is how the final table will kick off when action resumes at 2 pm Wednesday:

Racener Among Chip Leaders in COLOSSUS

Day 2 of the $565 COLOSSUS kicked off on Tuesday with 539 players remaining from a field of 13,070. All remaining players are in the money and could focus on marching towards the final table.

Several big names started Day 2 of this event but none bigger than 10-time bracelet winner Phil Ivey. Ivey doesn’t typically play in these low buy-in events when he is at the WSOP but he chose to this year. However, he was knocked out early in Day 2 action.

Other notable players to fall during Day 2 include Matt Stout, Barry Shulman, David Bach, Jesse Sylvia, Kenny Hallaert and Joe Cada. By the end of the day, just 33 remain with Thai Ha finishing as chip leader. Other notables still in the field include John Racener who finished among the top stacks.

The $1,500 Dealers Choice also resumed on Tuesday with 112 players remaining out of a field of 406. Only 61 players received a payday, including Allen Kessler who just did make the money in 60th place. Other players making the money but failing to finish Day 2 included Martin Staszko, John Monnette, Brandon Cantu, Brett Jungblut, Layne Flack and Josh Arieh.

Other notables that made it through to Day 2 include Chris Hunichen, Shaun Deeb, Jeff Madsen, Niall Farrell, JC Tran, Chris Ferguson and Phil Hellmuth.

The other new event was the $1,500 NL 2-7 Draw. It drew a solid field of 260 runners with 39 of those guaranteed a payday. Many big names entered this event and many fell on Day 1. Among those that managed to bag at the end of the day included Jesse Martin, Ryan Riess, Michael Gathy, Shaun Deeb, Jon Turner and defending champion Frank Kassela. Just 54 remain after Day 1 with James Alexander finishing as chip leader.

One of the most anticipated events of the series kicks off on Wednesday. The $10k Heads-Up NL Championship will draw an elite field of pros and heads-up experts.

The $1,500 HORSE is the early event and will draw both mixed game pros and amateurs. This event historically draws well so, expect a solid turnout.

Meanwhile, the Omaha Hi-Lo Champions is the only event expected to crown a winner on Wednesday while the $1,500 Dealers Choice and the COLOSSUS should at least reach the final table.