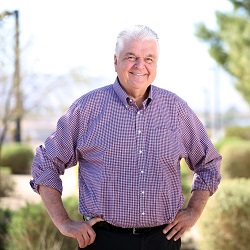 There were many reasons for supporters of online poker and gaming to watch the results of the 2018 November mid-term elections. Florida residents voted to give themselves the sole power to change gambling laws going forward. New York replaced a pro-online poker state senator who was retiring. Michigan retained a state representative who has championed internet gaming, including poker. And those are only a few examples of the impact that the election results had on the future of the industry.

Nevada may seem to be a state secure in its gambling rights, with no candidates posing any real threat to most forms of gambling. The state banks on every aspect of the industry.

But there was a key race in Nevada on Tuesday, and it was for the governorship. It was a fairly close race in a toss-up state. In the end, though, the anti-online poker candidate was defeated, but online poker will remain legal for the foreseeable future.

Congratulations to Governor-elect @SteveSisolak. I look forward to working with you during the transition.

The Democrat was Steve Sisolak, a businessman and Clark County Commission Chairperson. Though he was born and raised in Wisconsin, he attended the University of Nevada Las Vegas to obtain his master’s degree and spent most of his adult life in Nevada. He ran a race on fairly traditional Democratic stances with a focus on education, health care, and the economy.

The Republican was Adam Laxalt, an attorney that had served as the Nevada Attorney General since 2015. The Reno-born politician was also a Navy veteran. His gubernatorial campaign was supported by President Donald Trump though not by outgoing Republican Governor Brian Sandoval.

Most pre-election polls showed Sisolak in the lead, but the race was close enough that it became one of the most watched in the country leading up to November 6.

With so much at stake in a race to become the next governor of Nevada, online poker wasn’t debated or discussed in any forum or covered by any major news outlet. It did, however, become an issue that piqued the interest of internet gambling supporters.

Not only was Laxalt a friend of casino magnate Sheldon Adelson, who has campaigned for years to ban online gambling, he was also caught up in a scandal involving the billionaire. In 2016, Laxalt was found to have sent a series of text messages to Gaming Control Board Chairman A.G. Burnett regarding Adelson. The civil dispute involving Adelson came into play when Laxalt met with Adelson and then asked Burnett to intervene on behalf of Adelson. Burnett informed the FBI of the potentially criminal acts of the state’s attorney general.

Important story for poker players – Laxalt is anti-online poker in Nevada, frontrunner for governor in 2018. https://t.co/eBj6WfZ3Su

Laxalt and supporting PACs were also the benefactor of more than $150,000 in campaign contributions from Adelson and his Las Vegas Sands conglomerate over the past several years.

It wasn’t a surprise, then, that Laxalt opposed online gambling and signed on to letters supporting the Restoration of America’s Wire Act (RAWA) and efforts to overturn the Department of Justice’s Wire Act decision of 2011. These are efforts that Adelson has spent millions of dollars to push.

In addition, Laxalt spoke out specifically against online gaming in an interview with journalist Jon Ralston in 2015. Laxalt opined that the Wire Act decision changed the law “without gaming companies, without law enforcement, without all the parties that should’ve been involved to make sure that we can keep consumers safe and all this can be done properly.” This statement contradicted his own state’s law that legalized online poker and did exactly what he claimed couldn’t be done.

In response, Sandoval lashed out at Laxalt for the statement. Sandoval noted that online poker was legalized in Nevada years prior to engage younger gamers and maintain a competitive edge in the gaming industry. He called the Nevada bill that legalized online poker a groundbreaking one that allowed local businesses to grow and prosper. “I am very concerned that anyone representing the state’s legal interests would speak out against current state law in our leading industry,” he said.

With 99% of the votes reported, CNN confirmed that Sisolak won the election.

With that, online poker remains safe in Nevada. In addition, there may be little in the way of expanding the industry if lawmakers decide to expand the internet gaming industry to include slots and table games. There have been no concerted efforts to do so thus far, but it could become an issue as more states like New Jersey and Pennsylvania reap the benefits of these online games.

We did it! I’m honored by your support, and honored to serve as the 30th governor of our great state.