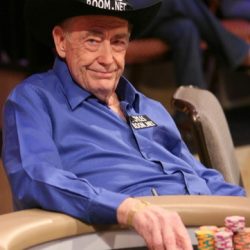 Two bracelets were awarded on Monday in the $1,500 Eight-Game and the $5,000 NL Hold’em, but those wins were overshadowed by the announcement that Doyle Brunson is retiring from poker after this summer.

Doyle decided to play one final event at the World Series of Poker, the $10k NL 2-7 Championship. He made the money and is sixth in chips going into the final day of play. The poker world will be watching to see if he can win his 11th, and final, WSOP bracelet on Tuesday.

Doyle Brunson announced Monday that he would play the $10k 2-7 Lowball Championship, hinting that it would be the last time he’d play the event. Upon arriving at the Rio, he announced that he will instead be retiring from poker at the end of the summer and that this event is his last-ever event.

Brunson revealed that he’s leaving the game to be with his wife who is having health problems and he feels he owes as much time as he can devote to her.

Knowing the turmoil in Doyle’s personal life, most didn’t expect much out of the 10-time bracelet winner. However, Texas Dolly didn’t appear ready to “ride into the sunset” and proceeded to chip up and take the chip lead soon after entering the event.

He retained that lead heading into the bubble period but lost over half of his stack. He then found a massive double with a seven-low to retain the chip lead and he rode that to the money. Also making the money in this event is Doyle’s son Todd Brunson.

By the end of Day 2 action in this event, just 11 players remain. Mike Wattel is the chip leader with Shawn Shiekan right behind. Doyle is sixth with son Todd ninth. Other notables in contention include Brian Rast, Galen Hall, Farzad Bonyadi, and John Hennigan.

Can Doyle win his 11th career bracelet before riding into the sunset? We’ll find out Tuesday!

The last day of the $1,500 8-Game saw a stacked field of 16 players return to take their shot at the bracelet. Daniel Negreanu, Anthony Zinno, Mike Matusow, and John Racener were the main headliners. By the time the final table was reached, Matusow and Zinno had hit the rail.

At the start of the final table, Negreanu was second in chips while Racener was the short stack. Philip Long had a sizable lead over the rest of the field. Despite being the short stack at the start of the six-handed final table, Racener managed to ladder up to finish in fourth. In the end, his pocket threes were unable to outrun Long’s pocket fives.

Daniel Negreanu made a valiant run at this final table, but he couldn’t get much going three-handed and ultimately hit the rail in third when he ran two pair into a set of kings from Kevin Malis.

At the start of heads-up play, Philip Long and Kevin Malis were relatively even in chips. Malis took the chip lead briefly but afterward was unable to create any momentum. His stack was eventually whittled down to less than a big bet. While he managed a double, it was peanuts compared to what he needed to compete.

In his final hand, he was all-in during Razz with J-6-3 against Q-A-2 for Long. Long caught perfectly and had a 6-5 by sixth street. Milas had a queen with a jack redraw, meaning he was drawing dead.

UK’s Phillip Long took down the bracelet in this event along with $147,348.

The $5,000 NL Hold’em Event is one of the stronger fields of the sub-$10k events and that was highlighted by the talent at this final table. Canadian pro Shawn Buchanan started the day as chip leader while former bracelet winner David Peters looked to pick up his second career crown. High stakes regular Jake Schindler was also looking to take down the title to win his first bracelet.

Below are those that made the final table and their starting chip positions:

Richard Tuhrim started as the short stack and finished in 8th when he ran Kh-10d into the Ac-Kc of Jeremy Wien. David Peters started in third chip position but couldn’t get anything going at the final table. Ultimately, he busted in 7th when his Kd-10h was outdrawn by David Laka’s Qd-7d on the turn.

Shaun Buchanan then unexpectedly busted in sixth place when he got shove happy with pocket fives pre-flop against Laka. Laka had jacks, made the call and jacks actually held for once to bust Buchanan. John Amato busted on the very next hand when his Jc-4c failed to outrun the Ac-10h of Eric Blair.

Jake Schindler played well at the final table and was in good shape to double into the chip lead against David Laka. He was all-in with pocket kings against Ah-Kc for Laka. However, a Barry Greenstein on the river sent Schindler home and gave Laka a 2:1 chip lead over the rest of the field three-handed.

Eric Blair fell in third place when he put in his last 800k pre-flop with 8d-9h. Laka made the call with Jc-10s and proceeded to catch a jack on the flop to take the hand.

At the start of heads-up play, David Laka had 10.6 million in chips to just 2.4 million for Jeremy Wien. Wien hung tough and battled his way back, eventually taking the chip lead. The pair continued to battle for a while with neither gaining much ground and it appeared only a monster cooler would end the day.
That cooler came on the 290th hand of the final table. On a flop of Jh-8c-2h, Wien checked and Laka bet 1.25 million. Wien check-raised to 2.5 million and Laka shoved.

Wien made the call and showed pocket aces while Laka showed pocket queens. The board bricked out baby cards. Stacks were counted down and Wien just had Laka covered, meaning that Wien was the champion.

This was Jeremy Wien’s first WSOP bracelet. He also earned $537,710 in prize money.

Jeremy Wien was scheduled to be at work on Monday morning. Instead of working in his New York office, the derivatives trader won the $5,000 BB ante no-limit hold'em event and his first bracelet. https://t.co/6k8URnOS1B pic.twitter.com/YeUKbZ0Nua