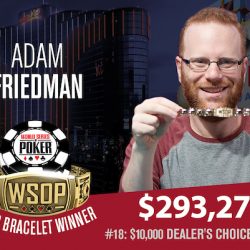 Adam Friedman one of three bracelet winners on Sunday.

Three WSOP bracelets were awarded on Sunday. Oguyan Dimov managed to survive a stacked final table to win his first title in the $1,500 NL Six-Max.

Four of the final six players in Event #17: $1,500 NL Hold’em Six-Max were former bracelet winners. Joey Weissman, Ryan D’Angelo, Nick Schulman and Yue Du were all looking to add to their bracelet tallies.

In the end, it was the two non-bracelet winners that ended up battling for the title and $378,743. Here’s how things started at the beginning of the final table:

Yue Du fell in the very first hand of play. Coming in as the short stack, he was all-in with a flush draw against just a flush draw for Nick Schulman. The flush failed to hit and Du collected $60,686 for sixth.

Joey Weissman started the final table as chip leader but steadily slid until he was the short stack. He went out in brutal fashion in fifth place when his pocket queen was cracked by the 10s-4s of Ognyan Dimov. Dimov turned a flush to knocked Weissman out.

Dimov later eliminated Ryan D’Angelo in fourth when his Ks-Js outran D’Angelo’s pocket nines. Dimov was firmly in control at this point and eliminated the last bracelet winner in the very next hand. Nick Schulman was all-in with Ad-10c and had Dimov’s As-8h dominated. However, Dimov rivered an eight to knock Schulman out.

Ognyan Dimov had a monster chip lead over Antonio Barbato at the start of heads-up play and never lost any ground. He ground Barbato down to just 7 big blinds before Barbato moved all-in with Ac-9h. Dimov called with Kd-6c, but as had been customary at this final table, a suckout was coming.

Dimov caught a six on the flop and king on the river to take the hand and his first bracelet. Barbato had to settle for the $233,992 second-place prize.

Ognyan Dimov became just the third Bulgarian in history to win a WSOP bracelet, taking down this event and $378,743 in prize money. This victory gives Dimov the second leg of poker’s Triple Crown. He won an EPT event in 2015. Dimov now has $1.44 million in live tournament earnings, 11th on the Bulgaria All-Time Money List

The final of the $10k Dealer’s Choice Championship played out on Sunday with three players looking to stake their claim to the bracelet. Adam Friedman returned as chip lead with just over 3 million. Alexey Makarov had 1.32 million while Stuart Rutter started as the short stack with 1.14 million.

Rutter wasted little time doubling through Makarov in NL 2-7 Draw and this setup Makarov’s third-place exit. After the first draw in a PL 2-7 Triple Draw hand, Makarov was all-in and drew two cards. Rutter stood pat as he had after the deal.

At the start of heads-up play, Stuart Rutter led Adam Friedman 3.38 million to 2.16 million. After some back and forth play, Friedman moved back into the chip lead and then took a massive lead over Rutter.

The final hand came in Stud Hi-Lo. By sixth street, Rutter was all-in with a pair of deuces and a low draw against queens up for Friedman. Rutter needed a deuce or a non-pairing low card to stay alive. He ended up pairing his seven to make sevens-up and that was the end of his run. Rutter finished in second, earning $181,258.

This was the second career bracelet for Friedman. His last win was in 2012 when he won the $5k Stud Hi-Lo Event. For this win, he also earned $293,275 for the largest score of his live poker career.

The third event to play out on Sunday was the $565 PL Omaha Event. At the start of the day, 10 players remained, but as is customary in PLO, the action was fast and furious and the final table was reached quickly.

Duhamel started the final table as a short stack and put it as risk with Ac-Ks-8h-3d. Craig Varnell called with Kc-Qc-9h-4h. Varnell flopped top pair and a flush draw and turned two pair to take the hand and send Duhamel to the rail in sixth place.

After Duhamel’s elimination, Varnell proceeded to knock out every other player en route to winning the bracelet. He knocked out Christopher Trang in fifth, Maxime Heroux in fourth, and Omar Mehmood in third place.

At the start of heads-up play, it seemed that Varnell was going to easily run away with things as he had a 10.5 to 1.6 million chip lead over Seth Zimmerman. However, Zimmerman found a couple of doubles and managed to move into the chip lead.

Varnell then retook a massive chip lead after doubling through Zimmerman with a turned straight against a set of eights. Zimmerman managed a couple of small doubles but never came close to the chip lead again.

Zimmerman was finally all-in with Ad-Kh-Qd-4h against Kd-Jc-9s-5s for Varnell. Both players hit a pair on the Qs-Jh-3d flop. The turn 6s missed both, but the 9d on the river gave Varnell two pair and his first career WSOP bracelet.