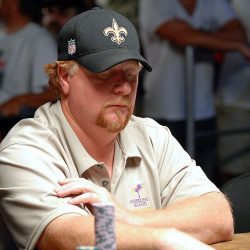 On Saturday, September 19, Todd Anderson of Heartland Poker Tour and Poker Night in America fame announced it on Twitter. Poker player and enthusiast Darvin Moon died of complications from surgery.

Details remain sparse about Moon’s cause of death. He died at his home, according to his official obituary. His wife, Wendy Moon, survived him, as did two brothers, three sisters, two brothers-in-law, one nephew, three nieces, and several great nieces and nephews.

Friends in the Oakland area of Maryland may pay their respects at the Newman Funeral Home this evening. A funeral service for family and friends will be conducted there on Wednesday, September 23.

The obituary suggests planting a tree in memory of Moon, a nod to his career as a logger.

Moon lived a somewhat simple life before poker notoriety. He and his wife, Wendy, lived in a trailer in the small town of Oakland, Maryland. Darvin and some other family members founded and managed a small logging company, a source of modest income for many years.

First introduced to poker at a young age by his grandfather, Moon played with friends throughout his life. As poker’s polarity grew during the poker boom, he watched more on television and took the game a bit more seriously. And he studied some strategy, he put that to use at home games at the local fire department, Elks Lodge, and American Legion.

In 2009, Moon set about trying to win a seat into the World Series of Poker, specifically the WSOP Main Event. He played some satellites at the nearby Wheeling Island Casino in West Virginia. He tried three times, one of which transformed his $130 buy-in into a WSOP prize package, including a $10K buy-in to the Main Event and $6K in travel expenses.

Moon wasn’t sure he would play the Main Event, as $10K was a lot of money, and the 46-year-old could have kept it. But when he took the trip to Las Vegas that summer and watched some of the WSOP action, he decided to play the tournament.

If Moon made it through the first few days of action and slid into the money, he could walk away with at least $21,365. It was quite a payday for a recreational poker player with no experience in large events as the WSOP.

Moon played well and returned day after day. He was the chip leader for a number of days in the tournament, taking that lead into the final table with 30% of the chips in play of the final nine players. Action paused at that time to allow television broadcasts to catch up. The “November Nine” then returned to Las Vegas in November to play the final table.

As he continued on, he busted players like Phil Ivey, ultimately making it to heads-up play against Joe Cada. The latter won, but Moon walked away with $5,182,601 for finishing in second place.

Thanks for the memories Darvin moon. You inspired so many people and starred in one of the most memorable final tables in WSOP history. We will never forget. Rest In Peace. pic.twitter.com/QHDArJLDyh

Moon fielded a variety of sponsorship offers after his 2009 WSOP finish and notoriety, courtesy of ESPN’s broadcasts of the tournament.

However, most of those offers were not of interest to Moon. He certainly had no interest in online poker, as he never even owned a computer and didn’t have an email address in 2009. He also didn’t like to travel much; his first time on an airplane was to fly to Las Vegas that summer.

When Moon took his second-place money and went home, he told reporters, “We ain’t gonna change.” And while he did use quite a lot of his WSOP winnings to help family members with college tuition and such, and invested in some hometown projects, Moon didn’t change his life all that much.

He played a few tournaments in the year or so that followed, such as the National Heads-Up Poker Championship on NBC, and he cashed in an occasional poker tournament here and there.

The one role Moon did eventually accept was that of Heartland Poker Tour Ambassador. At that time, HPT President Todd Anderson said the partnership was a perfect fit. “Darvin is our kind of guy,” he said then. “He’s worked hard his entire life and now lives the dream that attracts so many to the game.”

Poker remained mostly a recreational activity for Moon, as it had been prior to the 2009 WSOP.

Many in the poker world expressed sadness at the sudden and unexpected loss of Moon. He was only 56 years old.

The best person I ever met through poker is Darvin Moon. A man of integrity and honor. And quite possibly the most interesting person I’ve ever known. Truly. He and his wife Wendy became good friends. Sadly, Darvin succumbed to complications from surgery today. He’ll be missed. pic.twitter.com/oq0DmL74Jk

I met Darvin Moon when we played three-card poker right after he finished runner-up in the WSOP Main (photo cred @Pokerati) then drank more than a few beers over the years with him and Wendy.

RIP to one of the nicest guys to play on the big stage. pic.twitter.com/cBV8qGOnXy

We mourn the loss of friend and poker player @DarvinMoon. He loved the game and played it as such. Didn't care for publicity, endorsements, or the spotlight. He wanted to win outright and played like a the gritty woodsman he was. Godspeed Darvin. (with @philivey @WSOP @cada99) pic.twitter.com/zHaT91UfSs

Another one of poker’s colourful characters has taken his seat in the Big Game in the Sky. RIP Darvin Moon. pic.twitter.com/kvm0BZ5PQM

game. A clerk overheard us and jumped in with a story about her family knowing Darvin’s family. Another clerk overheard and, before long, it was a twenty minute discussion of Darvin Moon – the local guy who went to Vegas one summer and beat the pros. (2/4)