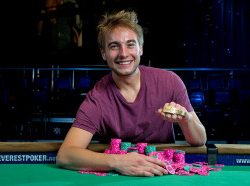 Two online bracelets were awarded over the last two days at the 2018 World Series of Poker. Ryan Tosoc took down the $1,000 WSOP.com ONLINE NL Championship for his first bracelet less than two weeks after making the final table of the $25k PLO High Roller.

On Saturday, Chance Kornuth became just the second person in WSOP history to win both a live and online WSOP bracelet after taking down the $3,200 WSOP.com ONLINE High Roller Event.

Like all online events at WSOP.com this event played out in a single day and the final table concluded with Anthony ‘Flawlessbink’ Maio facing Ryan ‘Toosick’ Tosoc for the title. Stacks were nearly even at the start of heads-up play with the chip lead swapping multiple times.

Just as it appeared that Maio was beginning to pull away, Tosoc found a double. He put his stack at risk with top pair against a flush draw. Maio missed his draw and Tosoc had close to a 2:1 lead.

A few hands later, Maio looked down to Ac-9c and shoved but found himself dominated against the As-Jd of Tosoc. The board missed both players and Tosoc’s jack kicker was enough to give him his first career WSOP bracelet.

Tosoc had a near-miss for his first bracelet a couple of weeks ago when he finished sixth in the $25k PLO High Roller. This time around, he broke through for his first WSOP bracelet, winning the largest WSOP.com ONLINE Championship in history for $238,779.

Tosoc now has two of three legs of the Poker Triple Crown completed. He won the WPT Five Diamond World Poker Classic in December for his first World Poker Tour title. Now he just needs an EPT title win to complete the crown.

The $3k WSOP.com ONLINE High Roller returned for the second year on Saturday and saw a nice bump in attendance. There were 480 entries this year, easily surpassing last year’s 424.

To give you an idea of the speed of online poker tournaments compared to live events at the Rio, this event took just 12 hours to complete. Several big names made the final table including Noah ‘The Punter’ Bronstein, Justin ‘kingfortune’ Liberto and Chance ‘BingShui’ Kornuth.

Ultimately, it was Kornuth facing David ‘bewater’ Goodman for the title. Kornuth started the heads-up match with over a 4 to 1 chip lead and it didn’t take long to crown a winner. In the final hand, Cornuth rivered a set of sixes to beat the turned middle pair for Goodman.

This victory gave Cornuth his second career WSOP bracelet along with $341,598. Kornuth won his first WSOP bracelet back in 2010 after taking down the $5k PLO Event. This win also gives him the distinction of becoming only the second person in WSOP history to win a live and online WSOP bracelet. Nipun Java is the only other player to accomplish this feat.
Fellow bracelet winner Ryan Leng provided the perfect troll-ish tweet in congratulations of Kornuth:

Congrats @ChipLDR’s @ChancesCards for winning the @WSOPcom $3200 High Roller!! This is actual footage of him playing the final hand heads up! Who needs live tells ?‍♂️ pic.twitter.com/RV4iT1kAl4

Kornuth’s victory is going to move him over $6.2 million in career earnings. His WSOP up to this point had been somewhat unremarkable with just five cashes prior and none above $10k. Of course, he’s now added a nice chunk of change to his bankroll and it will be interesting to see how he progresses through the rest of the 2018 WSOP.