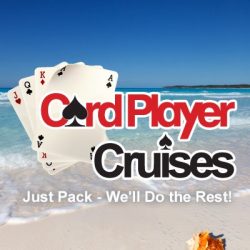 The poker community has been focused on land-based gambling during the pandemic. From card rooms to home games, coronavirus impacted every form of live poker. Another part of the industry that has remained shuttered for more than a full year now is floating card rooms, those on cruise ships, the best known of which is Card Player Cruises.

The pandemic forced Linda Johnson and Jan Fisher to stop running their poker cruises in early 2021.

As positive cases of Covid-19 popped up on cruise ships in March, most ships were able to dock and release their passengers. Some, however, stayed at sea for weeks to contain outbreaks before finally allowing passengers and crew members to disembark. The Centers for Disease Control and Prevention (CDC) reported at least 3,689 Covid-19 cases and 41 deaths related to cruise ships in early 2020.

This week’s Card Player Cruises newsletter, however, radiates hope that two cruises slated for later this year may be able to happen. And the team is putting together solid cruise options for 2022 and 2023.

From Uncertainty to a Shutdown

The onset of the pandemic spread as much uncertainty as it did the virus itself. Most nonessential businesses forced to halt operations in March 2020 under the impression that it was temporary. A few weeks – at the worst months – would be tough for any business, but everyone was ready to hunker down and wait for groups like the World Health Organization (WHO) and the CDC in the United States to get a handle on the virus and figure out what to do.

Card Player Cruises issued its first message to customers and friends on March 14, 2020. Royal Caribbean suspended all cruising in and around the US for 30 days. But Card Player hoped to run its Galveston cruise in last April and Hawaiian cruise in early May as planned.

Card Player trusted the cruise ship companies to make they right decisions. “If they sail, we sail,” they wrote. But any cancellations would be met with a 100% refund or 125% credit for a future cruise.

Only 10 days later, though, Royal Caribbean cancelled the aforementioned cruises but still hoped to return to cruising in mid-May. Card Player remained hopeful for its fall cruises, but June brought the cancellation of the September Alaska cruise and the one scheduled for Canada and New England in September. By August, they had to cancel the three remaining cruises for 2020.

As the calendars changed over to 2021, pharmaceutical companies began to distribute Covid-19 vaccines in large numbers. The first three months of the new year have brought much hope with millions of vaccines distributed in the United States and the cautious (mostly) reopenings of businesses.

In mid-March, Card Player Cruises happily announced that Royal Caribbean planned to sail again in June 2021. Cruises were not back in full force or without limitations, but any news of business returning to normal in some way was hopeful.

In addition to ships providing filtered but fresh air and rapid Covid-19 tests for crew and passengers, cruise companies have implemented numerous new safety protocols. Even so, the CDC has yet to update its guidance for the cruise industry beyond its October 2020 Framework for Conditional Sailing Order. But no updates since then prompted Cruise Lines International Association to call on the CDC to life the order and allow “the planning of a phased resumption of cruise operations from US ports by the beginning of July.” The CDC responded by saying that an interagency review is in process.

Cruises on the Schedule

The latest newsletter from Card Player Cruises announced that the 2022 poker cruise schedule is done. First, though, Johnson and Fisher, and Tina and Mark Napolitano expressed optimism about holding on to two remaining 2021 cruises.

With the pressure on the CDC from cruise companies and states like Florida, the health organization might release updated guidance in the coming weeks. And as other businesses begin to resume something resembling normal operations, Card Player Cruises plan to do the same with the help of the cruise operators. That led them to create a full 2022 calendar that includes some rescheduled events from the pandemic cancellations.

-10-Night Hawaii Cruise: April 25 – May 5 on Royal Caribbean Ovation of the Seas

The Card Player Cruises team knows that things may change, but they feel fairly confident about 2022 and beyond.

“While we do not have a firm restart date yet, it doesn’t mean we are sitting around waiting for things to change,” the latest newsletter stated. “We have worked hard to get all our 2022 cruises locked in. They have been released on our website and we are currently selling all of them.”

They have also booked three trips for the 2023 calendar year and are working on more of them.