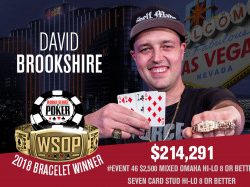 Meanwhile, the final table for the $10k PL Omaha Championship is set. Brandon Shack-Harris will lead the final six into play on Tuesday.

One of the more popular mixed game events on the WSOP schedule is the $2,500 Mixed Omaha Hi-Lo/Stud Hi-Lo Event. This year’s event drew 402 runners on Friday and by the end of play on Saturday, just 15 remained.

Violette and Blumenthal both fell short of the final table but Awad, Ospina, and Rodawig all managed to make it. Ultimately, none managed to make it heads-up for the bracelet. That honor fell to Brendan Taylor and David Brookshire.

At the start of heads-up play, Taylor had more than a 2 to 1 chip lead over Brookshire and soon extended that lead to more than 5 to 1. It was then that Brookshire started a slow comeback that soon saw him take the chip lead. Afterward, he wore Taylor down to the point where Taylor had just a single big bet remaining.

Taylor managed to climb back up to about 5 big bets before the final hand during Omaha Hi-Lo. Taylor was all-in on the flop with two pair and no low draw. Brookshire flopped the nut straight and had redraw outs to low. In the end, Taylor failed to fill up and Brookshire hit an unneeded low to win the hand and the title.

Prior to this event, Brookshire had a WSOP Circuit ring and now he has completed the motto of “First the ring, then the bracelet” after winning his first career bracelet in this event. In addition, Brookshire won $214,291 in prize money.

The final table for the $10k Pot-Limit Omaha Championship is now set. After two days of play, just 36 players remained in the field with several big names looking to make their way to the final table.

During the day the field was slowly thinned down to the final table. Some of the players that fell during Day 3 action included Scotty Nguyen (35th), Bogdan Capitan (32nd), Ryan Laplante (27th), Joey Ingram (17th), Dario Sammartino (15th) and Billy Kopp (11th).

Richard Lyndaker was the final table bubble boy, finishing in 9th. He was knocked out by Jerry Wong when he turned the nut flush against him. Alexey Makarov was the first player knocked out from the final table. He was all-in with queens against a pair of kings from Mike Leah. Makarov turned two pair but the board paired the river to give Leah a superior two pair.

Leah was in strong chip position to make the final day but became the short stack after a massive confrontation with Brandon Shack-Harris. The pair got into a raising war that left Shack-Harris all-in. Leah had flopped top two pair while Shack-Harris had bottom set. The turn and river missed both players and Leah was left with less than five big blinds.

A few hands later, Leah put those chips at risk with As-Jh-8d-2s and Ryan Hughes called with Ad-Ks-9h-4c. Hughes flopped two pair and Leah paired his deuce. The turn missed both players and the river gave Hughes kings-full to send Leah home in seventh place.

With Leah’s elimination, play ended with six players remaining. Brandon Shack-Harris will lead a star-studded final. Every player at this final has a bracelet with the exception of Jerry Wong. The final six will return Tuesday to play for the bracelet.

FT 10k PLO with a bunch of friends. Fun Fact: Any time I’ve sat at the same table with @lorenkln one of us has shipped. Here we are again!

Below are the chip counts for the final six: