Bovada Gears Up for Million Dollar Event in July 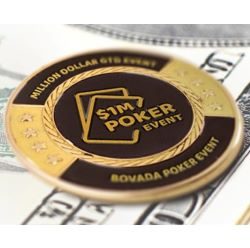 Online poker tournament guarantees draw players every time. The promise of a certain prize pool brings players to win a piece of that amount but also to see if there could be an overlay. Without enough players, the poker site must contribute to the prize pool to cover the overlay. That is free money just waiting for a taker.

Bovada knows that players love guarantees, but nothing draws players like a million dollars. And with nearly one month to qualify for a ticket, players have plenty of time to get in on the action.

The title of the tournament says it all. The Million Dollar Event will guarantee a $1 million prize pool, though the actual prize money could exceed that amount if more players enter to compete.

The tournament is set to take place on July 12 at 3pm ET.

Players can buy in directly for $535. Most players don’t have that type of bankroll flexibility, though, so they can begin playing satellites. They run around the clock for as little as $1.10.

Excellent satellite players can win up to four entries for the Million Dollar Event, as players will be allowed up to four reentries into the tournament. However, any tournament tickets for the event that go unused will expire and cannot be exchanged for cash or used for any other tournament.

For players who haven’t yet discovered the Monster Stack series on Bovada yet, there is still nearly one month to do so. Players start with more chips than usual, giving them better opportunities to play before putting their tournament life all-in.

The Monster Stack started in April and runs five events every day:

There are also three major weekly events, these with handy guarantees:

Players will find qualifiers for all of these Monster Stack series events running daily.

Just one more quick note. Through June 24, players who refer a friend will receive a ticket to a freeroll with $1K in the prize pool.

The Refer a Friend Freeroll promotion is in its last week. Players who refer a friend to Bovada through June 24 will receive a ticket on June 25 for the final freeroll with $1K in the prize pool. That freeroll is set for Sunday, June 28, at 3:05pm ET.