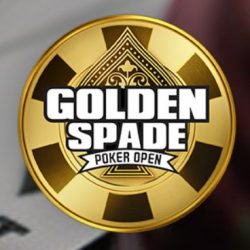 Poker players have had their pick of online tournament series this year, from PokerStars to PartyPoker and GGPoker… Oh wait, not if they live in the United States, though. Those in Nevada, Delaware, and Pennsylvania each have one option for state-regulated online poker, while players in New Jersey have several choices.

Bovada and Ignition are two of those sites, and luckily for players, they operate on the same poker network. This means they share player pools, creating opportunities for larger tournament guarantees and more game choices.

Both sites are now offering their tournament series called the Golden Spade Poker Open (GSPO). There are 166 tournaments and more than $10 million in prize pool guarantees.

The eighth running of the Golden Spade Poker Open is showing its popularity this year. So many new players signed up for accounts on Bovada and Ignition this year that the sites upped the options.

The growth speaks for itself:

The action kicks off today, October 17, and runs through November 18.

It’s the 8th edition of the GSPO & it’s our biggest one yet with over $10 Million in guaranteed prize pools! Happening from October 17th to November 18th with 166 events! Check out the poker lobby for the full schedule of qualifiers so you can play your way into GSPO8💰
​
​#GSPO pic.twitter.com/ifRiQjtAGB

Of course, there is a Main Event, but there is a miniature version, too. Both allow two reentries each and will take place on Sunday, November 15.

There are other highlights throughout the series. Some of them are for the high rollers, and others are simply bonus tournaments at key times during the month of festivities. These are some of the most interesting:

The series may be mostly No Limit Hold’em, but there is some Pot Limit Omaha action in there, along with plenty of variety in the structures and formats. There are unlimited reentry events, those with turbo structures, and quite a few offering more chips – even monster chips! – than the standard event. There are knockouts and ante-up events, low rollers and low buy-ins.

Bovada and Ignition are running satellites now and throughout the GSPO. Get in for as little as $1.

GSPO GIVEAWAY!! Win a $27.50 GSPO qualifier tournament ticket! To enter: follow us on Twitter, like & retweet. This Giveaway ends on Monday, October 19th at 11:59pm & the winner will be announced on Tuesday, October 20th! Good Luck! 💰🔥#Giveaway #pokergiveaway #ignitionpoker pic.twitter.com/p5Gy5MgRuS