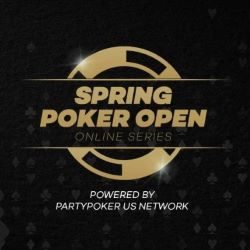 There is no shortage of online poker for players in New Jersey this weekend…or any day of the week for that matter. But this weekend – the first weekend in April – will be especially busy.

The PartyPoker US Network has been gearing up for its Spring Poker Open, a series of online poker tournaments with 17 events and more than $400K in guarantees.

Players will have a wide range of buy-ins and game variations from April 5 through April 12. The eight-day series will accompany the normal daily schedule on Borgata and PartyPoker in New Jersey.

Join us for the Spring Poker Open online series, April 5 – 12!

Action begins on Sunday, April 5, at 8pm. The first event of the Spring Poker Open will be the start of Event 1, a Phased No Limit Hold’em tournament with a $100K guarantee.

For those new to unique online poker concepts, the phased tournament is one played in sections – phases, you could say – and combined in the end. The starting days for the Phased event will offer numerous starting days, and all surviving players will resume play in one spot for the final day. In this Spring Poker Open Phased NLHE event, there is a starting flight on every single day of the series. Those eight starting days culminate in a finale on the evening of Sunday, April 12.

There are also two Main Event tournaments on the schedule, both playing on April 12. One offers a $55 buy-in and $20K guarantee, while the other has a $400 buy-in and $100K guarantee.

The Spring Poker Open powered by @partypokerUS will run online in New Jersey April 5-12, 2020 and will offer $400k+ in guarantees!

The $400/$100kGTD Main Event is already in the lobby! #BorgataPartner #onlinepoker pic.twitter.com/IfHCaxj5pF

BetMGM and Borgata Online each posted the schedule for the Spring Poker Open. It is as follows, with all times as Eastern and the Main Events highlighted:

Every player who enters any of the events in the Spring Poker Open will receive an entry into a special tournament set for April 19. The Invitational Freeroll will award the top 25 finishers each a $600 seat into the next land-based Borgata Poker Open kick-off event.

Someday, live poker will resume, and the Borgata will be ready with a Borgata Poker Open series.