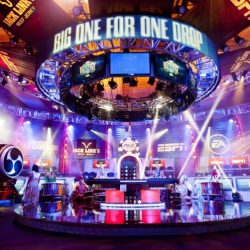 The final event of the 2018 World Series of Poker kicked off on Sunday and it was one of the most anticipated events of the summer. The $1 million Big One for One Drop kicked off at Noon and drew a superstar field of poker players and high rolling amateurs

Numbers for the event were less than originally anticipated, but the event should still produce the largest first-place prize of the summer. At the end Day 1 action, Rick Salomon, and Phil Ivey lead all players.

Back on June 15, the WSOP confirmed that 30 players had committed to play in the Big One for One Drop. The fielded a list that included players such as Rainer Kempe and Phil Hellmuth. Only about half of those “confirmed” were listed, but the field that showed up on Sunday was a bit short.

Only 24 players showed up for the Big One for One Drop with both Hellmuth and Kempe noticeably absent. Also, William Barth, the winner of the MGM International Invitation-only satellite to this event has also yet to show up to take his seat. Also, the first person to confirm for this event, King’s Casino owner Leon Tsoukernik, has also yet to arrive to play the event.

Granted, there is always a chance that more people could register late seeing that late registration continues until the start of Day 2. However, it seems odd that someone would late register a $1 million tournament unless they are having trouble getting the funds together for the buy-in.

David Peters had the dubious honor of the first man out in the event, busting in about 2 levels. Peters’ final hand was a bit of a cooler against Adrian Mateos. Peters flopped two pair with 10d-9h while Mateos picked up a flush draw with Ks-9s.

Mateos made a flush on the turn and all of Peters’ chips went in on the river. Mateos made the call and Peters was out in under two levels. According to the live blog on PokerNews, that quick exit was equivalent to Peters losing $8,500 per minute. That’s Gus Hansen online poker style losses.

Antonio Esfandiari Will Not Become a Two-Time Champion

If you missed the final house of the 2018 WSOP Main Event, and who could blame you as the event ran until 7 am EST, you probably didn’t know that Antonio Esfandiari actually skipped out early so he could rest up to play in this event.

Sadly, Esfandiari’s run in this tournament was a quick one as he was the second person eliminated. He put the last of his chips in with A-K and ran into pocket kings of Jason Koon. Since this wasn’t the Main Event final table, kings held and Esfandiari will be available to call the final table on Tuesday.

2012 Big One for One Drop winner Antonio Esfandiari is the second elimination of the day, falling to Jason Koon.

Cary Katz was the bane of Isaac Haxton’s existence in this event. Prior to the last break of the night, Katz doubled through Haxton when Haxton tried to bluff with K-Q on a board where Katz caught trip aces.

Later, Haxton was sent to the rail by Katz when Haxton shoved with Kc-Qd and Katz woke up with Ah-Qc. The board failed to produce a king or diamonds and Haxton was the third person eliminated.

Cary Katz doubled through Isaac Haxton, then collected the rest of his chips a few hands later to bring the Big One for One Drop field to 21 about 75 minutes of play left tonight.

In the last level of the day, Phil Ivey ended up busting two players. First, he sent Bryn Kenney to the rail. Ivey turned a straight and Kenney shoved with a flush draw. Kenney missed his flush and was out.

A bit later, Jake Schindler moved all-in with Qd-Jd and Ivey called with As-Kh. Both hit a pair on the flop with Ivey’s aces being best. He sent Schindler to the rail and took the chip lead holding 11 million.

Two more eliminations in the Big One for One Drop as Jake Schindler and Bryn Kenney leave 19 players playing the last 30 minutes tonight.

Play concluded at the end of Level 10 with 19 players remaining. Rick Salomon finished the day the overall chip leader with 11.44 million. Phil Ivey was right behind with 10.36 million. Daniel Negreanu finished third with 8.1 million.

Rick Salomon bags up the Day 1 chip lead of the Big One for One Drop.

19 players remaining. Day 2 resumes at noon, at which point registration will close.

Registration for this event is still open and will close when Day 2 play begins. It is possible we could still get a few more players, especially considering that new players will still start with 50 big blinds. The prize pool along with payouts will be announced after registration concludes tomorrow.