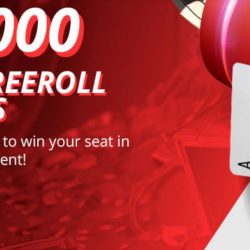 Everyone knows about the typical madness that takes place in March. Betting on those college basketball games is very popular, and many American bettors place their wagers on BetOnline.ag and SportsBetting.ag. Both are US-facing sites.

Many poker players have discovered, especially over the past year, that the online poker games on those sites are also juicy. There aren’t a lot of high-stakes cash games and high roller tournaments, but there is a wide variety of poker available at low and medium stakes. BetOnline.ag and Sportsbetting.ag share their poker player pools, which means they combine for larger guarantees and more game options.

This month, players can bet on basketball while also playing in some poker freerolls. There is a $10K free prize pool on the line…and much more for those who win free tickets into the month-end $150K Sunday Main Event.

The big tournaments take place on Sunday, March 28, but the path to free seats starts now.

A Different Kind of Madness in March

The promotion is called the $10,000 Poker Freeroll Madness. And it runs every single day leading up to March 28.

Every day, there are challenges for poker players to complete. Complete the requirement and win a seat into the 8pm (ET) March Madness Freeroll. There is one happening every single night until March 27. The tasks are as follows:

Players who want to participate should go to the “My Missions” section of the lobby (or the “Contests” tab for mobile players). Opt in for a mission, complete it, and it is as simple as that.

The top 50 players in each night’s freeroll will win a seat to the $10K All-In Shootout, which will take place on Sunday, March 28. (Each player can only win one seat throughout the month.) And that prize pool in the shootout-style freeroll is $10,000 in free money.

Every night this week we are having exclusive freerolls where 10 players will get to play in our Sunday $200K Main Event on 3/28 completely for free!🔥

The freeroll starts at 8PM Eastern 👀

Comment your BetOnline Poker name below to be invited 👇 pic.twitter.com/Djya0RmLbR

The top 100 players in the March 28 freeroll will also win tickets to the $150K GTD Sunday Main Event that starts at 1pm ET. Looking in the tournament lobby, though, it looks like that March 28 Main Event is a special one with a $200K guarantee.

One of the most popular March competitions so far is the $20K High Hand Leaderboards. Players at any stakes in the cash games (No Limit Hold’em only) can qualify from 12pm ET to 10pm ET on Mondays through Fridays. They will win points for every one of the following hands:

The high hands must see a flop to earn the points, and the table must have three active players at the time of the hand.

Every two hours, BetOnline will tally up the points and award prizes:

There is also the Bad Beat Jackpot, a separate one for Boost games, and Windfall SNGs that offer the chance to turn a $10 buy-in into $1M.

And don’t forget that we offer a special welcome bonus for new players creating an account on BetOnline.