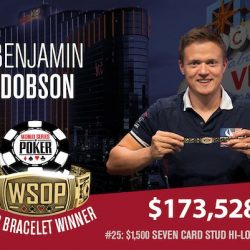 Dobson is one of two bracelet winners on Thursday

Meanwhile, Filippos Stavrakis finally broke through for his first live tournament victory after taking down the $1,000 PLO Event after holding the chip lead for much of the day.

Event #25, $1,500 Stud 8 or Better, needed a fourth day to finish. Just three players remained in this event on Thursday with Benjamin Dobson returning with more than a 2:1 chip lead over his other opponents.

Here are the chip counts for the final three players:

Bets were at 100k/200k when action resumed, meaning that Martin had just three big bets. He managed to chip up some early on but wound up getting knocked back down to just 1.5 big bets prior to his last hand.

In his final hand, Martin put the last of his chips in with split aces against an 8-7-2 for Benjamin Dobson. By sixth street, Dobson had improved to sevens up with an eight low draw and Martin had failed to improve his aces. The river blanked both players and Martin was out in third.

Dobson had a 2.5 to 1 chip lead over Tim Finne at the start of heads-up play and things never improved for Finne. After the limits went up, Finne was ultimately down to just 2 big bets.

Bet put the last of his chips in on fourth street holding a pair of sevens with a backdoor flush and backdoor low draw. Dobson held 3-4-5-6 for an open ended draw. Dobson caught a six-high straight on fifth and that would prove enough to win the hand and the bracelet. Tim Finne earned $107,243 for his runner-up finish.

Dobson has been playing live events for ten years, but this is his first major tournament win. His best WSOP finish prior to this was a third-place finish in the $2,500 Omaha 8/Stud 8 Event at the 2015 WSOP.

This time, Dobson broke through to win his first career WSOP bracelet and a career-best first place prize of $173,528. His win put him over $1 million in career tournament earnings.

The other event to award a bracelet on Thursday was Event #26, $1,000 PL Omaha. Fourteen players looked to take down the title and the $169,842 top prize. Filippos Stavrakis started the day as chip leader with Ruslan Dykshteyn the next closest player.

Filippos Stavrakis dominated heading into the final table and had nearly a 3 to 1 chip lead over the rest of the field. Rasmussen, Siegel, and Cowen all made the final table.

Cowen was the first to fall at the final table when Stavrakis turned a flush against top two pair. Rasmussen fell in seventh after Peter Klein flopped a set of threes to outdraw Rasmussen’s queens.

Jordan Siegel caught fire at the final table and was a huge chip leader five handed. However, Stavrakis hung tough and secured a big double-up with Ad-Ac-2h-2c against A-K-J-7 double suited to nearly pull even with Siegel.

Stavrakis retook the chip lead for good after knocking out Felipe Ramos in third place. Ramos was all-in and on the bad end of a straight over straight confrontation. Ramos had the sucker end of the straight and Stavrakis took a big lead into heads-up play.

Jordan Siegel was unable to get anything going heads-up and was down to about 13 big blinds before the final hand. On a flop of Kd-7s-4d, he put the last of his chips into the pot with Ac-8d-6d-2d for a flush draw and a gutshot straight draw. Stavrakis had Ad-7d-7c-4s for middle set and the nut flush draw. The turn and river blanked both players and Stavrakis had his first WSOP bracelet.

Filippos Stavrakis has been a regular at the WSOP and on the WSOP Circuit since 2011 but has never broken through for his first victory until now. His win in this event is his first live tournament win and the largest score of his poker career.