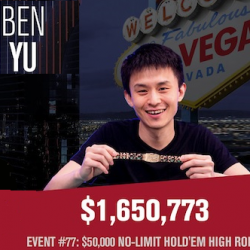 The first of two events to complete on Saturday night was the $3k HORSE. This was the last mixed games bracelet of the WSOP drew a solid field of 354 players. The final table of this event was expectedly a star-studded one with Bruno Fitoussi, Dutch Boyd, Lee Markhold, Jeff Madsen, Tim Marsters, Brian Hastings, and Andrew Brown all making the final.

Then Hastings started going on a rush during a round of Seven Card Stud. Betting limits were so high at this point that just a few hands ended up switching the lead over to Hastings. His rush continued in both the Hold’em and Omaha Hi-Lo rounds and Brown quickly found himself left with just two big bets.

The then put those chips at risk during Omaha Hi-Lo with Ah-9h-5c-2d and Hastings called with 10s-10h-7h-4s. The flop fell Qh-Jc-9d and Brown’s nines were behind Hasting’s tens. The turn 2h gave Brown two pair but the river Jd gave Hastings a better two pair by counterfeiting Brown’s ducks.

This was Hasting’s fourth career bracelet and first since 2015. He has won bracelets in four different tournament styles, including Heads-Up NL, Seven Card Stud and 10-Game Mix. In addition to the bracelet, Hastings earned $233,202.

One of the more eagerly anticipated events by the High Roller community was Event #77, $50k High Roller. This event drew a massive field for a high roller in 127 players, creating a prize pool of $6.14 million. The top two players walked away poker millionaires.

At one point, it seemed that Petrangelo was going to run away with this one as he had a huge chip lead three-handed. However, Nick Petrangelo made an odd call pre-flop when he called an all-in shove from Sean Winter with just 10c-7c. Winter had Ah-5d and proceeded to flop two pair. Those pair held and Winter began to go on his own rush.

Ben Yu then doubled through Winter with pocket nines against As-8d to get within striking distance of Winter. A few hands later, he knocked out Petrangelo after his pocket fours caught a full house. Petrangelo earned $720k for third to go along with his win in the $100k High Roller. Quite a feat for the high rolling superstar.

At the start of heads-up play, Ben Yu led Sean Winter 18.27 million to 13.72 million. Heads-up didn’t last long as Yu shoved with Ks-Qh pre-flop and Winter called with Ad-9h. The flop missed both players, but the turn fell the Kh and that proved enough to give Yu the hand and the bracelet.

Ben Yu won his third career gold bracelet last night in the $50K NLHE High Roller for $1.65 Million. The win moved him up to second place in the 2018 Player of the Year standings. https://t.co/QoaxTBX4ir pic.twitter.com/KI7vKqxcb7

Despite looking barely old enough to gamble in live casinos, the 32-year-old Yu has career earnings of $5.25 million. His victory in this event is the largest live score of his poker career. Considering Yu’s prowess in all poker variants, this will hardly be his last bracelet win.