Barbara Enright Is Most Overlooked Story of 2018 WSOP Main Event 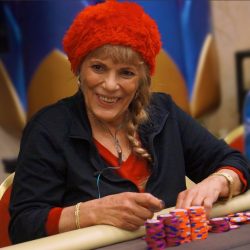 Day 5 of the 2018 World Series of Poker Main Event was a busy one as players looked to build a stack to make a run at the final table. Many big names fell during play, but today the only name I care about talking about is the woman who finished in 292nd place – Barbara Enright.

Unless you follow poker Twitter or Max Shapiro’s Facebook, you probably didn’t know that Barbara Enright even cashed in the WSOP Main Event. That’s because the majority of the poker media overlooked her presence and missed out on one of the best stories of the series.

Barbara Enright Run Went Unnoticed by Most of the Poker World

One of the more remarkable stories of this Main Event was the run by three-time WSOP bracelet winner Barbara Enright. Enright is perhaps best known for being the first and only woman to make a WSOP Main Event final table, doing so back in 1995.

You'd think that the only woman to ever make the @WSOP Main Event final table (@love2bluff ) going deep in this year's Main would garner at least SOME coverage eh? Not a single mention in the live blog. @PokerNews @AuntyChardonnay

Of course, this was posted at the beginning of Day 5. A day earlier, her chip stack was misreported as being 1.2 million, and while that was later revealed to be wrong, you’d think that someone would have realized that Enright’s run was a bit of a big deal. But alas, this did not happen.

I saw that PokerGo mentioned that she was in the field, but outside of that, there was almost no coverage anywhere. I tried finding a single mention of her outside of chip counts on PokerNews, found none.

Update: Haley Hintze of WSOP.com and Flushdraw.net informed me that she had mentioned Barbara in her Day 4 recap of the event at WSOP.com. I definitely appreciate the fact Haley gave her some press, but this could have been made much more of a story by the media as a whole.

Officially, Enright finished in 292nd. While a far cry from the final table, it is still a remarkable run considering that she outlasted over 96% of the field. She outlasted many big names, including Phil Hellmuth, Daniel Negreanu, Phil Ivey, Maria Ho. She also outlasted Bill Edler who received an entire feature while Enright couldn’t get a single post in the blog.

Enright earned $37,705 for her deep run. While not even close to the massive score that some players make on a regular basis, this was her largest cash in 20 years. The last time she won more in a single event was back in 1998 when she took down a Limit Hold’em Event at the Carnivale of Poker.

Poker HOFer Barbara Enright is a badass, and her ringtone is Bad Moon Rising. That is all.

On the surface, one would assume that she doesn’t play that much poker anymore, but that’s the furthest thing from the truth. Just take a look at her Hendon Mob profile and you can see the insane number of tournaments she’s cashed in over the years. Just prior to the Main Event, she just missed the final table in the Ladies Event of the Aria Poker Classic.

Anyone that has played poker seriously around Las Vegas and Los Angeles has probably played with or has seen her playing in events on a regular basis. She primarily sticks to smaller buy-in events. This Main Event run was remarkable, but not unexpected based on her past play.

Lack of Coverage Disappointing to Say the Least

Having covered the Main Event in the past, it is very surprising that Enright’s run went completely unnoticed by the poker media. With the amount of clamoring we hear from the poker community wanting stories that are “good for the game,” this seemed to be a complete no-brainer.

It is more surprising seeing that we are always trying to find ways to attract more women to the game of poker. Barbara Enright is Poker Hall of Famer, Women in Poker Hall of Famer, three-time bracelet winner, and a woman who excelled in a “man’s game” for decades. How is her run not worth mentioning?

So what happened here? It’s not that those covering the Main Event don’t know who she is. There are plenty out there that have covered her and probably have even played a few hands with her at some point. Some of you will point out that my main beef should be with PokerNews. While there would be truth to that, PokerNews was not the only place that could have ran with this story and didn’t. Sites always want unique content, and this would have been a unique angle to coverage.

Was her chip stack not sexy enough to report on? Maybe she didn’t get drunk enough or stoned enough to deserve coverage. Perhaps if she berated some players she’d get some coverage.

It’s a shame that the poker world didn’t get to hear more about Barbara Enright this year. When I first met her, she was more interested in discussing the things to go see and do in Las Vegas than she was talking about poker. That’s not to say she couldn’t talk about poker but having been in the game as long as she has, the game truly seemed secondary to life.

She was always great to have a friendly chat with at the tables or to tag team with in three-way Stud 8 pots to chop up the other player’s chips. She is as tough as nails as a player and a classy person.

Sadly, in terms of coverage this year, she is little more than just another statistic lost in a sea of 7,874 players. She deserved better.

Update – After posting this article, Sarah Herring of PokerNews took notice and included Barbara in her Day 6 update. While it would been nice to seen Barbara covered throughout, this was a classy act by Herring to acknowledge her run. Check out the video below: