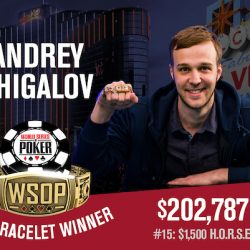 Only one new WSOP champion was crowned on Saturday as Andrey Zhigalov took down the $1,500 HORSE after defeating Timothy Frazin heads-up.

Meanwhile, there will be four WSOP bracelet winners competing for the $1,500 NL Six-Max title on Sunday. Joey Weissman leads while Ryan D’Angelo will look to win his third career WSOP bracelet.

Finally, Virtue Poker has announced that they have 30% of Phil Ivey in over $100k worth of WSOP buy-ins this summer. Also, he will be playing in the $1 million Big One for One Drop at the end of the series.

The $1,500 HORSE Event needed a fourth day to complete play with Andrey Zhigalov leading Timothy Frazin by about 1.5 big bets. On Friday, this event played to the final table and ultimately the final two. Former bracelet winner Scott Clements was the featured player at the final table but fell in seventh place.

It only took 20 minutes to crown a bracelet winner on Saturday. Zhigalov took the lead during Omaha Hi-Lo when he flopped trip deuces and rivered a full house against trip queens for Frazin. He then chopped Frazin down to just two big bets during razz when he forced Frazin to bet on the river despite Frazin showing a relatively strong board.

The final hand came a little later in Razz when Frazin put his last 300k at risk with 7-4-A against the 9-6-2 of Zhigalov. Frazin could only manage a jack by the river while Frazin rivered a nine to win the hand and his first bracelet.

Russian Andrey Zhigalov finally broke through for his first career bracelet in this event, also earning $202,787 in the process.

Poker fans will be in for a treat at the $1,500 NL Six-Max event. Four of the final six participants are previous WSOP bracelet winners. Joey Weissman won a bracelet back in 2012 and will take the chip lead heading into the final table.

Ryan D’Angelo won a $1,500 2-7 Draw bracelet back in 2016 and is looking for his first Hold’em bracelet and second overall. He will start third in chips.

Nick Schulman is another Lowball champion, having won two lowball bracelets. He is the second shortest stack and is looking for his third career bracelet on Sunday.

Yue Du’s last live cash was his WSOP bracelet win in the $5k NL Event back in 2016. He starts the final table as the short stack but still has over 20 big blinds.

Ognya Dimov and Antonio Barbato are the only non-bracelet winners at the final table. Dimov is second in chips while Barbato is fourth.

Here’s how the remaining players are stacked heading into Sunday’s final table:

Phil Ivey to Enter Big One for One Drop

As most of the entire poker world is well aware, Phil Ivey has made his return to live poker and is playing at the 2018 World Series of Poker. He has already played in the $100k High Roller and made a surprise appearance in the COLOSSUS, making day 2.

Now it appears we will be seeing a lot more of Ivey this summer and we now know that it is partly due to his consulting deal with Virtue Poker. The site announced that they own 30% of Ivey’s action in $100,000 worth of tournaments this summer.

Also, they have a 5% stake in his action at the $1 million Big One for One Drop. This announcement essentially confirms what many suspected in that he will be playing in the event as part of his WSOP schedule.

Win a piece of the @philivey ! Virtue Poker owns 30% of Phil Ivey's action in $100,000 worth of tournaments in this summer's series and 5% in the $1 million buy-in event. Minimum prize is $10,000. Enter at https://t.co/XbKPVqzCzf #sweepstakes pic.twitter.com/KLZiY6NsV8

Ivey joined Virtue Poker as a consultant back in November 2017 and is hoping to help the Ethereum-based crypto poker site become a major player in the market.

It will be exciting to see where the rest of the series takes Ivey. He is presently tied at for second for most WSOP bracelets won. Doyle Brunson, Johnny Chan, and Ivey all have 10 each.