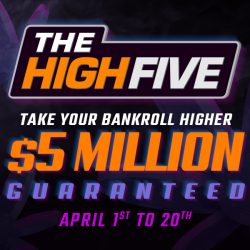 Americas Cardroom just wrapped up its massive OSS Cub3d three-part tournament series, which kicked off on February 2 and ran through March 15. And poker players cumulatively won millions upon millions of dollars.

As we head into April, ACR players have another online poker tournament series. The popular High Five series offers something for everyone, a wide range of buy-ins and guarantees and five tournaments per day. There will also be double the usual Main Event action, with a multiple-flight lower buy-in Main Event with $420K GTD and a larger buy-in boasting of $1M GTD.

The High Five was originally created with a weed-smoking theme, with numerous references to 420:

Some tournaments even reference the activity, like the Wake & Bake events, Light Up!, and the PKO Late Toke.

Get it? See what they did there?

What players mainly need to know is that this iteration of the High Five tournament series offers 100 official events – plus some bonus events thrown in – with five of them running per day. The buy-ins range from $0.25 to $2,500, and Americas Cardroom is guaranteeing $5M in prize pools.

It all begins on April 1 and runs through Tuesday, April 20. Most of the daily action begins early in the morning but offers those bonus tournaments and mega satellites throughout the schedule.

There are a plethora of satellites running all the time, but the big ones for the $450 buy-in Main Event action begin on April 4 as follows:

The full High Five schedule boasts of more than 100 tournaments. It is viewable in its entirety on the ACR web page – complete with late registration, levels, starting stacks, and format information.

However, here are some of the highlights, including the Main Events:

Most days will offer an Early Special NLHE event at 6:30am, each with a $10K guarantee for $16.50 or $17 buy-ins. And each evening will offer a PKO Late Toke event at or near 10pm of 10:30pm with buy-ins ranging from $6.60 to $25. Some of the Late Tokes are official numbered High Five events, but most are extra tournaments, usually in NLHE format but sometimes PLO variations. Those guarantees range, too.

✋5️⃣ This is something you'll regret.