888poker Game Pick’em8 Proves to be a Mixed Bag 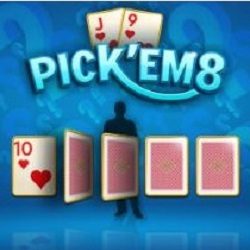 In October, 888poker made its first mention of a new poker variant called Pik’em Poker, which has now been renamed Pick’em8 Poker. The developers at 888 wanted to offer something fresh for its players, a game that might draw in new players and reignite the poker passion for others.

While PokerStars had been introducing new variants throughout 2018, other sites lagged behind what seemed to be a trend, so 888poker mentioned Pick’em8 Poker. However, very little was known about the game, as no information was given about how it would be played or how it would veer off from any of the traditional games.

As of December, the game was announced and then released, complete with directions as to how to play and critiques from the poker community. However, it should be noted that there was no press release or social media blitz to advertise the new game; the announcement came from Pokerfuse.

… a lot of people (like me, right now) disseminating the game without getting your message out there first. Hey I'm no PR expert, maybe they have a master plan.

It could be because they know the game is a little broken atm. My second play I got a freeze and had to hard restart. pic.twitter.com/hon5NYVsbw

In the lobby’s Pick’em tab, players can choose from buy-ins of $0.25 or $1.00. Prize pools are displayed in the list alongside the buy-in, and the amount of money in the pool rises as more players join that game. The action is fast, which means players must make somewhat quick decisions as to when to jump in.

Once a player joins a game, he or she is given eight cards, and the player must choose two of them as their own hole cards. If he or she is too slow in picking the cards, they will be automatically selected when the game begins. Five community cards are then put on the board, and each player uses standard Texas Hold’em rules to make the best poker hand possible. The player with the strongest hand wins the prize pool, and another round begins.

Players can jump in or out after each round, making it a quick game for those without a lot of time to play or for those who want fast poker action. And the more players in each hand, the larger the prize pool.

Technically, Pick’em8 is a poker variant, as it plays by the general rules of Texas Hold’em and uses the traditional hand rankings. There are two hole cards, five community cards, and a winner who holds the best hand.

Realistically, Pick’em8 is more like a casino game, as players are actually playing against the house. While they are trying to beat their opponents’ hands, there is no way to compete against them via bets and raises to push them off a hand, boost the size of the pot, or bluff. When it is boiled down, the game is a house-based one with players unable to use skill to outplay their opponents.

this is not a "the games should be beatable" argument; if it's a house-always-wins scenario, fine. I just think at this level of rake it will die very quickly.

As far as most can tell, there is no plan to promote the game at this point. It seems that 888poker took a page (another one?) out of PokerStars’ playbook and floated the game to garner feedback from those who find it and try it out of sheer curiosity. Depending upon the positivity or negativity that results, 888poker can then refine the game and announce an official launch or remove it with little to no pushback from the public.

Essentially, the goal of the game seems to be to mix the popularity of several aspects of online poker with casino play to find the sweet spot of mass appeal.

First, the fast-paced nature of Pick’em8 is something that appeals to many players who haven’t the time to commit to long tournaments or intense cash games.

Second, the promotion of it as a new poker variant appeals to poker players who may be bored with traditional games like hold’em. PokerStars’ efforts in this area have been well-received, though, in all fairness, those games are still skill-based poker variants.

Third, the removal of the skill factor may appeal to some players who don’t want or have the time to dedicate to learning game strategy or theory. They want the fun of poker without the time it takes to become a better player. Pick’em8 provides the feel of poker, but the loss of a hand can then be blamed on bad luck without the personal responsibility.

It remains to be seen what – if anything – 888poker will do with Pick’em8 as the new year arrives.

In the client, they seem to go to lengths to not call it poker. They say it is a "fun, fast, strategic *poker-based* game."

But on webpage (if you can find it!) they classify it as a "poker game" and it some places it is referred to as "Pick'em Poker."https://t.co/xK6rwjITl1 pic.twitter.com/gq95FSmlY9