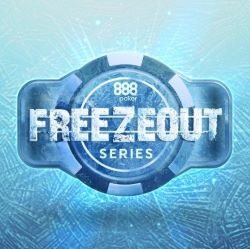 It seems that every online poker tournament these days offers rebuys or reentries. The move toward reentries has become much more common in recent years, and players now have a harder time than ever finding freezeout tournaments. Every player buys in once and busts or wins.

888poker listened and developed a tournament series with those players in mind. The 888poker Freezeout Series offers 24 tournaments from June 14-29, complete with $665K in guarantees.

This new series began yesterday, Sunday, June 14. Technically, the Main Event began, as it offers so many flights that 888poker had to begin running those a week before the rest of the series gets underway. The actual first event of the Freezeout Series actually begins on June 21.

You asked for it, and we delivered!

A #Freezeout 🧊🧊🧊 Tournament Series with $665K in GTDS 💸💸💸 and no re-buys and no re-entries allowed – plus very affordable buy-ins!

Those Main Event flights began yesterday and one flight is on the schedule each day through the rest of the series. Then, on Monday, June 29, all surviving players compete on the final day of action. (That Main Event offers a $200K guarantee.)

Of the 24 tournaments in the series, not one allows reentries. There are still guarantees on the prize pools, though, and it will all culminate in the aforementioned Main Event.

These numbers showed an increase from the previous year’s XL Inferno series, as those 34 events drew 39,378 entries and awarded $1,695,881 in prize money.

Ultimately, the Main Event offered a $500K guarantee, which attracted 2,146 entries. That surpassed the guarantee, as the prize pool set at $504,310. Junijuniorz of Sweden took down the tournament for more than $85K and the title.

If you missed out on all the 2020 #XLInferno 🔥🔥🔥 action, here's your chance to catch up! https://t.co/PxFJ1nEDya pic.twitter.com/dkK7dqmomL