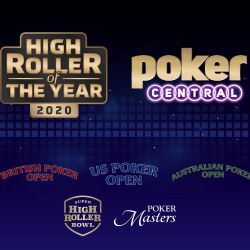 As the current year winds down, many in the poker world are already looking toward 2020. Poker Central is in that category, already announcing its US Poker Open dates and a new and improved High Roller of the Year award.

The US Poker Open is a high-stakes live poker tournament series that has proven popular with a segment of the poker population that possess larger bankrolls than most.

And the High Roller of the Year is a version of the Player of the Year that many tournament organizers use to honor a standout player each year. The Poker Central version tracks players in their high-stakes adventures and rewards the top points-earner. The 2020 award is going to be a bit different and richer with an additional $100K added.

The third year of the US Poker Open will usher players through the first part of 2020 with a March series of poker tournaments at the ARIA Resort & Casino in Las Vegas. The PokerGO Studio will ahead play host to the high-stakes poker action.

Serving as the first leg of the 2020 High Roller Triple Crown, those with significant bankrolls can head to the ARIA in March for 12 events. The buy-ins will range from $10K to $50K and offer a bigger mix of events than in the past.

The schedule for this series is as follows:

Introduced in 2018, the annual competition has been revamped for its third year. The High Roller of the Year award is more lucrative.

Players will earn points throughout the 2020 year as they play in qualifying live tournaments. Some will be a part of the aforementioned Triple Crown, while others will be part of the World Poker Tour, World Series of Poker, and more. High-stakes events are chosen to give players more opportunities to climb the leaderboard.

For example, there are numerous events on the 2020 schedule already. The ones beginning in January are as follows:

The list goes on to include more events at the Aussie Millions, then the entire Australian Poker Open set for The Star Gold Coast in Queensland, and on to the US for the LA Poker Classic in California. That brings players back to Las Vegas in March for the 2020 US Poker Open.

Players want to earn points for the end-of-year award for the prestige of it, but there will also be an additional $100K added to the prize money this year.

Poker Central President Sam Simmons noted, “The High Roller of the Year series is the storyline of the year, and we’re constantly striving to improve the experience for players and fans. The stakes have never been higher than in 2020 with multiple six-figures in added value for players who participate in our events around the world.”

As it stands in mid-December, Sam Soverel maintains a healthy lead over his competitors on the points chart. Soverel’s 2,820 points tower over the 2,000 points of Cary Katz and 1,685 of Ali Imsirovic.

It seems as if a player who wants to beat Soverel for the 2019 title will have to do exceedingly well at the upcoming WPT Five Diamond Series. They offer three qualifying tournaments: two WPT Five Diamond $25K NLHE and one $100K buy-in.

🔝 of the #HROY race
🔝 of the #BPO leaderboard
🔝 of the Poker Central Power Rankings
Can anyone stop Sam Soverel? 🛑https://t.co/6bxyRcj24s pic.twitter.com/AoyQ7ZjEHM