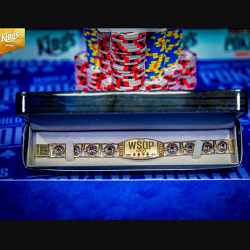 With the World Series of Poker little more than one month from its kickoff in Las Vegas for the summer, WSOP executives took this opportunity to release the final schedule of the WSOP Europe.

The European set of tournaments isn’t set to begin until the middle of October, but players who find success at the summer WSOP events are likely to eye a trip to the WSOP Europe in the fall. And there is no better advertisement for the Czech Republic series than to promote it to players who are already fans of the brand.

Back in February, the World Series of Poker planners let the public know that the WSOP Europe would begin on October 15 and run through November 4, 2019. And King’s Casino in the Czech Republic would again host the action of live poker tournaments and cash games.

Now, the full schedule is available with €14 million in prize pool guarantees.

The poker room action at King’s Casino/Resort will be in full swing, with tournaments technically beginning on September 20 and running all the way through November 4. The official WSOP Europe schedule, however, runs from October 13 to November 4.

This will be the third year that King’s will host the WSOPE festivities and the 11th running of WSOP Europe. Complete with two high roller tournaments and two versions of the Main Event, players will have the following options on the schedule, each awarding a WSOP gold bracelet.

Speaking of action before October 13, that is where the WSOP Circuit (international edition) comes in. That runs from September 20 through October 6 with 14 WSOPC tournaments, all awarding traditional Circuit gold rings.

That schedule offers events with lower buy-ins and with guarantees only on some of the prize pools.

King’s Resort will host more than a month of WSOP events, so players should know how to get there.