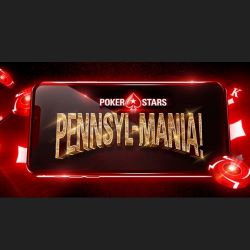 The inaugural Pennsyl-MANIA tournament proved to be a huge success in May. It is no surprise that it will return to PokerStars PA on August 23.

PokerStars remains the only online poker provider in Pennsylvania. When it launched in November 2019, most people suspected that another site would follow in short order. The newest online gambling market had more potential than New Jersey, and operators would be anxious to provide some competition for PokerStars. Those assumptions were wrong.

More than nine months later, PokerStars still owns that market. There have been rumors and rumblings about a WSOP site and a PartyPoker site on the verge of launching online poker for Pennsylvanians, but months have passed with no word from those operators or the Pennsylvania Gaming Control Board.

And since PokerStars has been the sole state-licensed online poker site in Pennsylvania throughout the 2020 coronavirus pandemic, it has taken advantage of the situation by offering numerous tournaments and series.

Since the Pennsyl-MANIA was a success and a singular tournament without the complications of a series, August seemed like a good month to offer a second edition.

Registration showed that 1,760 original players participated, and they accumulated 1,014 reentries. That put the total entries at 2,774 and the resulting prize pool at $515,964.

This week, PokerStars and its US-based partner FOX Bet and land-based casino partner Mount Airy Casino Resort announced the return of Pennsyl-MANIA. It will take place on August 23-24

The two-day event will kick off at 17:00 ET on Sunday, August 23 with four hours and 35 minutes of late registration. During that time, players are allowed up to five reentries. Twenty-two players are already registered to play, including justbuy44.

If the prize pool stays at $350K for the next one, the winner will receive $178,393.12. However, there is a reasonable expectation that the final tally will far surpass that $350K figure.

As always, there are many ways for players to qualify for the tournament at a discount from the $200 price tag. Satellites start at just $5, some of which are already running. Many satellites also have a guaranteed number of seats available.

There is also a deposit bonus for players putting in $30 or more and using the bonus code “MANIA.” Those who do so will receive a ticket to the Pennsyl-MANIA Depositor Freeroll, which will award the top 50 finishers each with a $200 ticket to the tournament.