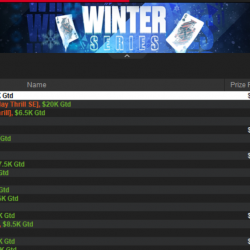 PokerStars wants to give its online poker players in New Jersey the chance to be a part of a substantial tournament series this month. The Winter Series returns for PokerStars NJ and FOX Bet players located within the borders of New Jersey on January 21.

The series will be the first of many in 2021. This year’s iteration, though, is bigger than last year’s by far. The 2020 Winter Series for New Jersey offered only $300K in guarantees, while the upcoming series will guarantee at least $500K. And the number of events more than doubled.

PokerStars is running its Winter Series concurrently in New Jersey and Pennsylvania this year to award a cumulative $1.5M…at least.

It all starts next week.

PokerStars decided to up the ante, so to speak, on everything for New Jersey this year. For the Winter Series of 2021, there will be $500K in tournament guarantees spread out over 40 tournaments. The entire series is almost double the size of the one hosted last year.

Action kicks off on January 21 and runs for 11 days through January 31, complete with a $100K-guaranteed Main Event and even a Mini Main Event. Those will be the grand finale of the series. Players of almost all bankrolls will be able to participate, as buy-ins will start at $20 and hit as high as $750.

Let’s get to the schedule lineup:

There are a few non-hold’em tournaments, including some PLO and a mixed game. Players have a wide variety of formats to choose from, though, from knockouts to 6-max tables and turbo structures.

Players are winning seats into the tournaments as we hit publish on this article. There are special $3 Spin & Go’s happening on PokerStars NJ, and qualifier tournaments are great ways to win seats at a bargain price.

Any player depositing at least $30 from now through the end of the series – using a special “FREEZE” bonus code – will win a ticket to a special Depositor Freeroll on January 31, which will award $10K worth of tickets to the Main Event.

Second Chance Freerolls will also run throughout the Winter Series. Players who just miss the money in any Winter Series event will be able to play the freeroll for other Winter Series tickets.