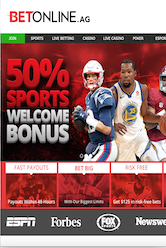 While the majority of attention in the U.S. gambling sphere as of late has been focused on the legalization of sports betting in a handful of states – and the subsequent flurry of new companies entering the space – you can’t go wrong with the tried-and-true option. That is exactly what BetOnline.ag represents, having been in the sportsbook game since the early-2000s. And while the path to prominence hasn’t always been smooth, the Panama-based book remains one of the most popular among American players for a variety of reasons which are laid out below in this BetOnline.ag sportsbook review.

The US accepted sportsbook experience starts with getting your money in and out easily. BetOnline.ag accomplishes this. They offer players one of the widest varieties of deposit and withdrawal options of any sportsbook in the world. Players looking to drop some cash into their account can do so via credit card, cashier’s check, wire transfer, money order, third-party sites like Neteller or Skrill. You can even use Bitcoin if that’s your currency of choice. However, there is one thing you should know. BetOnline.ag charges a six percent fee on credit card deposits. This is the biggest hit of any sportsbook operator accessible to U.S. players.

The variety of withdrawal methods aren’t quite as numerous. But they do include Neteller, Skrill, money orders, express checks or selected cryptocurrencies. You can also request that a withdrawal be applied to your credit card. However, only after you have made a minimum of five deposits and have had your account open for at least one month. BetOnline also charges a $25 fee for payment via check, or $50 if you want that check processed within seven days. This obviously isn’t ideal, particularly for low-stakes players. But BetOnline’s payment history over the past seven years has been strong, so you’re in good hands.

The BetOnline interface isn’t nearly as fancy as some of the sportsbooks out there, but it is simple to follow. Players will find the list of available sports on the left-hand side, with buttons that enable users to expand each sport into league subcategories. Player prop, game prop and futures menus are also included, along with a section devoted to wagering terms, bet types, limits, and frequently asked questions. Again, the design won’t win any awards, but it’s clean and simple. This should appeal to those who are looking to get started in the betting space without being overwhelmed by bells and whistles.

BetOnline has been an innovator on the sports odds side of things. They initially drew customers in by offering -108 odds on spreads and totals rather than the industry standard of -110. And while those days are gone, BetOnline has found other ways to bring in new users. This starts with the fastest-posted odds in the business. No competitor gets lines up more quickly than BetOnline. This is a huge feather in its cap given the appetite for early odds among casual and hard-core bettors alike. BetOnline is also among the quickest at providing odds updates. This can actually work against bettors looking to gain an edge when news breaks.

Another of BetOnline’s great innovations is the ability for users to create their own player props using a variety of drag-down menus. Let’s say, for example, that you want to bet on how many points Kyle Kuzma will score in a game. Simply select his name from a list of available players, select “Points” from the drag-down menu, then toggle the point total until you find a number you like. The odds update every time you change the number. This gives players access to thousands of player prop scenarios for a given sport schedule. You can also combine the player prop with his team’s game outcome for an extra thrill.

There is another great offering from BetOnline. They offer a massive futures list that includes the major U.S. professional sports. There is also NCAA football and basketball, chess, darts, politics, and even entertainment. Want to throw five bucks on which Game of Thrones character will die first in Season 8? You can do it here – and BetOnline updates those futures odds as frequently as any other sportsbook in the business. BetOnline might not have as many sports as its competitors. But the sheer number of betting options on the sports it does offer can’t be matched by anyone.

It can be difficult to find betting limit information on some sportsbook sites. But players won’t have that problem at all with BetOnline. Its limits section is as detailed as any site in existence, laying out the most a bettor can wager on a specific sport and bet type. For example, bettors can lay a maximum of $25,000 on a single NFL spread for a Thursday or Sunday game. However, that limit drops to $10,000 for the Monday nighter. Football and baseball props and futures are limited to a max bet of $1,000. All other futures bets come with a $500 limit. Parlays and teasers are capped at $5,000.

If you’re just starting out in the sports betting world, BetOnline.ag deserves your attention. Having been around a while, they know how to generate buzz in an industry where a lot of sites look and feel the same. By eschewing the frills and instead focusing on creative ways to enhance players’ overall betting experience, BetOnline.ag is succeeding where others can only hope to. They will continue to do so as long as it maintains a solid track record of payment processing and betting customization. And any site that allows you to wager on Tyron Lannister taking a dirt nap to open Season 8 is worth a look. 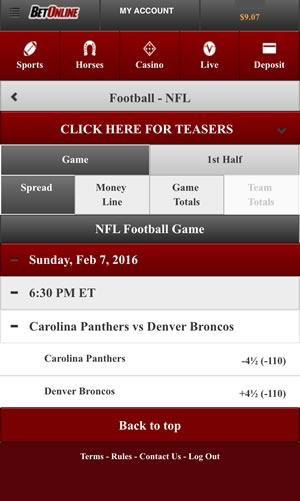