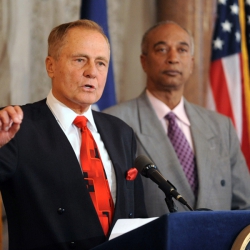 Who will champion online poker in 2019?

For the third year in a row, New York lawmakers had a good chance to legalize and regulate online poker, but it did not happen. The bill made less progress in 2018 than in the two previous years for a variety of reasons, not the least of which is an inability for the Assembly bill’s sponsor to overcome obstacles and garner support.

Every year, New York is put at or near the top of a list of states likely to join the new regulated poker market in the United States, alongside Nevada, Delaware, New Jersey, and Pennsylvania. But for it to hold that position for 2019, big changes will be necessary.

Oh, New York… The legislative session ended last night with no progress for online poker. See how the chaos left online gaming out in the cold. https://t.co/u3OOKSVxOu

Excuses of the Past

In 2016 and 2017, New York State Senator John Bonacic took his poker bills through the committee approval process and to the floor of the Senate, where the bills easily passed both times. The hurdle that stopped poker bills in their tracks both times was Assemblyman J. Gary Pretlow. He has had varying versions of the same story for several years regarding the inability to garner enough votes to even make the effort to push his bill through committees and to the floor.

Pretlow, on the other hand, had excuses early. He blamed his 2017 failure on women in the Assembly who were opposed to gaming but did vow to double his efforts in early 2018 to win them over. Meanwhile, he claimed he wouldn’t be able to do much with poker early in the year due to budgeting tasks, so he predicted he would find success in June.

Assemblyman Clyde Vanel stepped in to help in April, and he quickly came up with a plan to gather a multitude of sponsors for the bill. Dozens of sponsors did sign on to the bill, but Pretlow insisted barriers remained, such as convincing members of his conference that poker was a game of skill.

While Bonacic took an opportunity to push his bill through another committee in early June, Pretlow went silent. And that led to the end of the legislative session on June 20, where the online poker bills effectively died without any last efforts from Pretlow.

Pretlow did talk to OPR about the session and what happened… or what didn’t happen.

He claimed it boiled down to a numbers game. Pretlow said he had 68 Democrats commit to voting for the poker bill, though only 47 Democrats signed on as co-sponsors, alongside four Republican members. Even at 68, however, he was eight short of the 76 Democrats he needed for a majority vote down the party line. He claimed that the only way Assembly Speaker Carl Heastie would put the bill up for a vote, which Pretlow did request, was to have 76 Democrats on board. “I had 30 Republicans but I couldn’t use them,” he contended. “You can’t get 50 Democrats and 30 Republicans. That’s not how it works in New York. You need 76 Democrats to pass something. If the bill came to the floor, it would have passed with at least 90 votes.”

With a few more votes, can New York online poker happen in 2019? https://t.co/CmltgI7lyr

Even if that is taken at face value, Pretlow’s admission that “we didn’t really look at” the bill in the final weeks of the session might give an indication of what really happened. He admitted that he was more focused on sports betting, another bill that failed to get a vote.

On the Senate side, Bonacic has been nothing but a champion for online poker, but he gave notice this year that he is retiring. He will not be in the Senate in 2019, which means the proposal will need to start from scratch with a new sponsor. It is unclear if anyone can or will take up the torch.

On the Assembly side, Vanel has proven to be knowledgeable on the subject of internet gaming and immediately came to the table and brought more than 50 co-sponsors with him. As Chairman of the Internet and New Technology Subcommittee, he knows the value of an online presence for land-based casinos and the possibilities that open up when technology’s potential is used. He made more progress in the few months he supported A.5250 than Pretlow did in several years.

Speaking of Pretlow, it remains a mystery as to why he continues to sponsor a bill for which he has found so little success. Even Vanel’s enthusiasm this year wasn’t enough for Pretlow to get the bill to the floor. Either a new champion in the Assembly must be chosen or Vanel needs to assembly a coalition of Assembly members that will collectively push for poker legislation.

For three years, the poker community has listened to every excuse from Pretlow as to why he wasn’t able to accomplish his goals. And his words do not match his actions.

The best hope for New York online poker in 2019 is for the new Poker Alliance to get involved.

The Poker Players Alliance operated in the first half of 2018 with no funding, a leadership change that put a new president in place with no pay, and little advocacy. As it happened, the organization was in talks to change hands completely, but in the meantime, no one was on the ground in New York. There may have been phone calls and some connection with lawmakers, but there was no one working as a paid advocate for poker in any state, much less New York, where it could have made a difference. There clearly needed to be some form of mediator between Bonacic and Pretlow, and Vanel could have used some encouragement as well. A poker-focused organization in its prime should’ve been able to educate more members of the Assembly and put the bill where it needed to be for a vote.

Though the Poker Alliance has yet to announce plans or goals, or even give background on its new president, the organization is the best hope for New York online poker legislation in 2019.