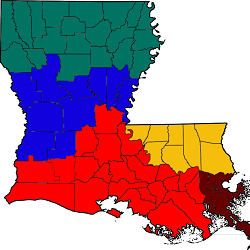 Louisiana wants each parish to vote on internet poker

Most southern parts of the United States aren’t known for their openness to gambling, much less expansions that put states in line with the latest industry advancements. But one Louisiana lawmaker wants to change that and push his state into the world of internet gaming.

Riverboat gambling has long been a moneymaker for Louisiana’s coffers. Pari-mutuel wagering has also been a big part of the state’s history. But moving beyond those revenue staples has not been an easy task for lawmakers. The lottery was not even approved in Louisiana until 1990.

It was in the 1990s, however, that the state began to prepare for more gambling. The Louisiana Gaming Control Board was created in 1996, and slot machines were approved for installment at racetracks throughout the state in 1997, with Louisiana’s first non-riverboat casino opening its doors in 1999. To date, the state has hosted some of the biggest casino operators in the business, such as Horseshoe, Golden Nugget, Flamingo, Harrah’s and Sam’s Town.

In addition, the Native American tribes of the state were able to enter into compacts with Louisiana after the passage of the federal Indian Gaming Regulatory Act of 1988. The Coushatta Tribe, Tunica Biloxi Tribe, and Chitimacha Tribe each established full-fledged casinos on tribal lands since those compacts were finalized.

Most land-based casinos in the United States have watched the last several years of New Jersey’s implementation of online poker and casino games into the overall gaming industry. They’ve seen the success, the hundreds of thousands of dollars that have buffered the state’s revenue numbers, not to mention the assertions from the casinos that the online gaming presence has resulted in an increase in overall patronage.

While there is no reporting that casino lobbyists have pushed for online gambling in Louisiana, it would not be a surprise to find that names like Caesars have been in touch with legislators.

Enter State Senator Danny Martiny. On March 2, he pre-filed SB.322, a bill with a simple goal to allow a public referendum on internet gaming.

Further, it provides for “a referendum election in any parish seeking internet gaming.” The new industry would be under the power of the Louisiana Gaming Control Board for regulation and rule-making purposes. As for internet gaming, the definition in the bill is “any variation or composite of an authorized game that is offered through the internet, provided that such games, or variations or composites, are found suitable for use by the board and any other game which is determined to be suitable by the board. The term includes gaming tournaments conducted via the internet in which players compete against one another in one of more games authorized by the board or in approved variations or composites thereof if the tournament is authorized by the board.” In other words, online poker is a part of the plan.

Essentially, any parish would be able to include a referendum on an election ballot that would simply read: “Shall internet gaming be allowed to be conducted within the parish of ____?” The voters would then decide the answer.

If approved, online wagering would be approved for people over the age of 21 who are located within the parish in which the referendum was approved. In those areas of the state, “internet gaming shall not be considered gambling by computer” as long as the operator is licensed and regulated per the law.

Essentially, this will also give Louisiana the authority to crack down on operators who are not licensed and those who offer internet gaming to state residents who in parishes that have not legalized the games.

As written, the law would be quite similar to the one pass in New Jersey, with the exception that the individual parishes will be able to determine the legality of the games rather than the entire state.

Finally, the bill notes that it will become effective July 1, 2018 – assuming the bill is passed expeditiously – and the effective date is listed as January 1, 2020. The long delay is presumably for parishes to add the referendums to ballots, determine election results, and for the Louisiana Gaming Control Board to create the regulatory framework.

Martiny is also pushing bills to legalize daily fantasy sports and sports betting, the latter which would be dependent upon the outcome of the current New Jersey case awaiting a decision by the United States Supreme Court.

The internet gaming bill is currently in the hands of the Committee on Judiciary B. The next step is to hold a hearing, as well as meetings to determine more of the details necessary to amend the bill, such as information about the types of games to be allowed, tax rates, revenue allocation, etc. If those issues can be resolved, the bill will be presented to the committee for a vote, after which it may be able to go to the legislature for further discussions and votes.

SB.322 has a long way to go, but the first step of laying the groundwork is important.