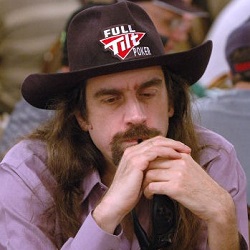 Jesus may have another tense WSOP this year

As players count down the days until the 2018 World Series of Poker begins, they prepare for the biggest annual gathering of poker players and fans in Las Vegas. Everyone does final bankroll checks, plans schedules, and gathers supplies – earbuds or headphones, phones or tablets, snacks, cash and player card, and a scarf for the Rio tournament rooms that are notoriously cold every single year despite the desert heat outside.

Chris Ferguson may do all of those things, but this year, he also prepared an apology. He wrote it out and read it to a camera. He likely believed it could ease tensions as he plays in WSOP tournaments and walks the Rio hallways in the coming weeks.

A Long Road for Jesus

As a highly recognizable figure in the world of poker, fans and players alike don’t often mistake the tall, long-haired, bearded man with the black hat and trench coat. During the poker boom, the Full Tilt Poker executive and pro was highly visible and incredibly popular. Chris “Jesus” Ferguson could throw a card across a room to slice a carrot in half. He loved ballroom dancing. He had an unmistakably signature look. He was also incredibly intelligent and cordial with fans.

The four major online poker sites – Full Tilt, PokerStars, UltimateBet, and Absolute Poker – were closed and seized by the United States Department of Justice, and some of their executives were indicted. PokerStars was the only one of the four that immediately worked a deal with the US government to reopen the site to non-American-based players and pay out all customer account balances. UB and AP disappeared, and Full Tilt revealed that it was a bankrupt entity. Player funds at Full Tilt were never separated from operating expenses, and while executives were paid millions of dollars, there were no funds left for players. Ultimately, PokerStars bought Full Tilt’s assets and repaid players as a part of its settlement, though the process was long and was not completed until 2017.

Ferguson had not only been one of the main faces and founders of Full Tilt Poker, he was also one of its directors charged in the Black Friday indictments. He eventually settled with the US government in early 2013. He agreed to pay a fine of $2.35 million and forfeit all designated funds (an unknown amount possibly up to as much as $25 million) without admitting any liability or awareness that there was wrongful activity at the company or that player funds were not available. He also forfeited $14 million owed to him by Full Tilt with the expectation that the money would be used to repay players.

The Long Return to Poker

In the summer of 2016, Ferguson appeared at the Rio to play in WSOP events. And he did amazingly well. He cashed in 10 bracelet events, one of which was a final table in the $10K NLHE 6-Handed Championship which led to a fourth-place finish for a $183,989 payout.

When asked for a statement about Full Tilt, Ferguson responded, “I’m just here to play poker.”

His 2017 WSOP was even more impressive, as he cashed in 17 bracelet events in the Las Vegas games, one being a fourth-place finish in the $10K PLO Hi-Lo Championship for $150,929 and another a second-place nod in the $10K Seven-Card Stud Championship for $151,700. Months later, he traveled to Rozvadov in the Czech Republic to play the WSOP Europe, where he five events and won another, the win coming in the €1,650 PLO Hi-Lo/8 event for €39,289. Ferguson not only set a record for cashes at the WSOP, he won the Player of the Year award.

But no matter his successes, Ferguson received a great deal of negative feedback from pro players and fans alike. Some were able to forgive and/or forget, while a significant portion of the poker community was not. It created more than just social media negativity; his intentional silence about the Full Tilt scandal had been deafening to many who were affected and prompted hostile comments to Ferguson in public places.

On May 23, six days before the WSOP opens the Rio hallways for poker action, Ferguson released a short video:

Watch “Chris Ferguson reaches out to the poker community” on #Vimeo https://t.co/pQxqEt93fh

“Hi, it’s Chris Ferguson. I’d like to take this brief opportunity to address the poker community, which I love and have been part of for a long time. I deeply regret not being able to prevent Black Friday from happening. After Black Friday, I worked relentlessly to ensure that all players got paid back, and I sincerely apologize that it took as long as it did. I also realize that it has taken me a long time to make any sort of public statement, and I appreciate my fans and the poker community as a whole for their patience and support. One day, the Full Tilt Poker story will be told, and like many of you, I look forward to that day. I hope to see you all at the World Series of Poker this summer. Thank you, and good luck.”

The response was fast and furious from the Twitter crowd, though Phil Hellmuth tried to get out in front of it with this supportive note about Ferguson:

Here is a video from Chris Ferguson. It’s a shame that so many of the younger poker players have JUDGED Chris so harshly. I believe that the whole truth about Full Tilt Poker will come out, and I believe the “Haters” will be surprised #IAmALoverNOTAJudge https://t.co/CABB6MXqS6

Some responses pointed out that Ferguson was a part of the company before Black Friday as well, and he was unable to ensure that player funds were protected despite his status within the company.

While some hold Ferguson as responsible for the Full Tilt debacle as anyone else at the company, others were simply angry that it took seven years for him to apologize or say anything about it at all.

I suspect Ferguson was less culpable than Lederer or Bitar for what happened at FT, but the timing of a 42 second apology seven years later is obviously a cynical attempt to make his Vegas run less stressful rather than a legit apology (IMO)

Needless to say, the apology did not go over well. Whether people felt that the video was too short, pre-written, lacking emotion, too late, insufficient, or too narrow, it was widely admonished on Twitter.

As someone who has been working in the poker world since 2003 and been writing about it in the poker media since 2006, I feel compelled to plead with Mr. Ferguson to tell his story.

It has been seven years since the poker world was turned upside down, and it becomes clearer each year that it will never be the same again. There will be no better time to speak the truth.

Say the names of the people who were at any level of fault in the matter, friendships be damned. Stop protecting those who may be in legal jeopardy or declining physical health. Your fans – and yes, you still have some – deserve the truth, as do your enemies. Everyone affected by the events of and after Black Friday deserves to know what happened, why it happened, and who was at fault.